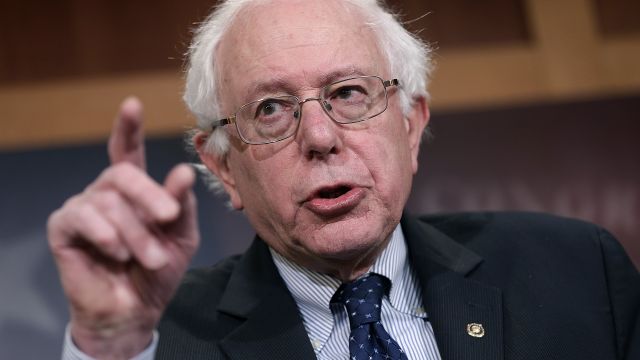 As Bernie Sanders tries to keep his campaign hopes alive, the Democratic candidate guaranteed on Saturday that the Democratic nomination will come down to a contested convention.

"It is extremely unlikely that Secretary Clinton will have the requisite number of pledged delegates to claim victory on Tuesday night," Sanders said on Saturday.

Notice how he said "pledged delegates" there. This is an issue Sanders has brought up several times during his campaign.

Pledged delegates are the ones usually awarded proportionally based on how the candidates perform at state primaries and caucuses.

As of Sunday morning, Hillary Clinton had 275 more pledged delegates than Sanders.

But superdelegates don't have to support a candidate based on how their state voted. They represent the Democratic Party establishment and can vote however they choose.

Here, Clinton blows Sanders out of the water with 501 more superdelegates.

Besides voting for whomever they wish, though, superdelegates can also change their minds.

And if Clinton doesn't win a majority of pledged candidates before the convention, as Sanders believes, superdelegates could switch to his side.

But Sanders has also hinted that superdelegates should cast their support according to the will of the people, and getting a majority of pledged delegates will be an uphill climb for him.

At the end of May, it was predicted he'd have to win 68 percent of the popular vote to win a majority of pledged delegates.

And that was before Clinton won all seven pledged delegates available at Saturday's caucuses in the Virgin Islands.

This video includes clips from Bernie 2016, CNN, ABC, MSNBC and Hillary for America and images from Getty Images.