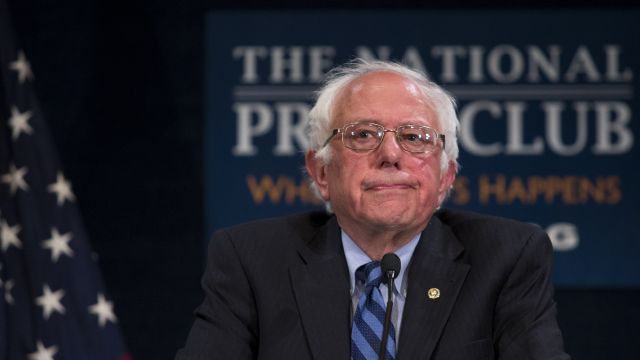 "I'm not going to New York City to hold a fundraiser on Wall Street," Sanders said.

Sanders, who has relied heavily on small donations throughout his campaign for the Democratic presidential nomination, has recently taken a considerable hit in fundraising.

Sanders reportedly pulled in $26 million in donations in April — a far cry from the $46 million he rounded up a month prior, and the lowest amount his campaign has reported since January.

The dip in fundraising could help explain why the Vermont senator's staff laid off more than 200 of his 500-plus campaign workers last week.

While Sanders trails Clinton by roughly 800 overall delegates, he's vowed not to go down without a fight.

"She will need superdelegates to take her over the top at the convention in Philadelphia. In other words, the convention will be a contested contest," Sanders said on Sunday.

The final Democratic primary will be held on June 14, with the Democratic National Convention scheduled to begin July 25.

This video includes clips from Bernie 2016, Hillary for President and the Democratic National Convention, and images from Getty Images.