Bernie Sanders' DNC Speech Was (Really) Emotional For His Supporters 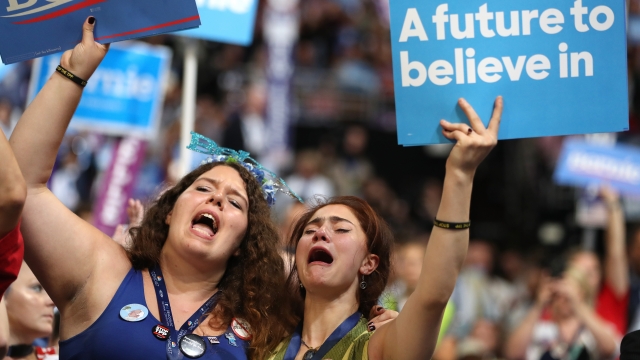 SMS
Bernie Sanders' DNC Speech Was (Really) Emotional For His Supporters
By Katie Link
By Katie Link
July 25, 2016
Night One of the Democratic National Convention was emotional.
SHOW TRANSCRIPT

Night One of the Democratic National Convention was emotional.

As Hillary Clinton is set to become the official Democratic nominee, Bernie Sanders supporters were really sad to see their candidate go.

Sanders is sad to go, too. "I think it's fair to say no one is more disappointed than I am," Sanders said.

But Sanders wants his fans to focus on how far they've come.

"To all of our supporters here and around the country, I hope you take enormous pride in the historical accomplishments we have achieved," Sanders said.