Bernie Sanders Asks Delegates Not To Protest On DNC Floor, They Listen 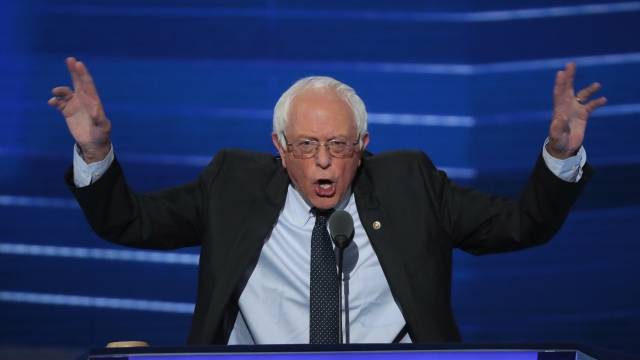 "This election is about and must be about the needs of the American people," Bernie Sanders said.

Sen. Bernie Sanders took the Democratic National Convention stage in prime time on Night One, and he touched on many of his campaign's talking points, including fighting wealth inequality, universal health care and criminal justice reform.

"At the Democratic Platform Committee, there was a significant coming together between the two campaigns. And we produced, by far, the most progressive platform in the history of the Democratic Party," Sanders said.

Sanders endorsed Hillary Clinton about two weeks ago, but he's since had trouble getting his supporters to join in.

"And we have got to elect Hillary Clinton and Tim Kaine," Sanders said during a speech before the DNC kicked off. He was booed by the crowd.

After that early afternoon speech, Sanders tried to get his delegates on board. He reportedly sent an email and text message to his supporters, asking them "as a personal courtesy" to not protest or demonstrate on the convention floor.

Before he spoke, one of his strongest celebrity supporters echoed his wish.

"To the 'Bernie or bust' people, you're being ridiculous," comedian Sarah Silverman said.

It seemed to work. Sanders was able to focus on the issues and start uniting the party.

"Our job now is to see that strong democratic platform implemented by a Democratic-controlled Senate, by a Democratic House and a Hillary Clinton presidency," Sanders said.

This video includes clips from C-SPAN and MSNBC and images from Getty Images.