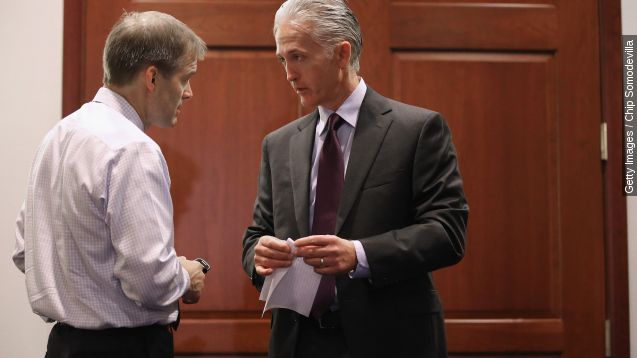 The House Select Committee on Benghazi has been running for about one year and five months now, and it's spent about $4.6 million investigating the 2012 attacks on the U.S. consulate in Benghazi. That's a lot. But it's not nearly as much as some other notable political probes. (Videos via C-SPAN, Congressman Trey Gowdy)

Let's start with maybe the most famous — the Watergate Committee. Created to probe President Richard Nixon's cover-up of the Watergate hotel break-ins, the committee's hearings became something of a national spectacle thanks to continuous TV coverage. (Videos via PBS, C-SPAN)

The committee managed to extract key testimonies from several witnesses, including White House counsel John Dean III and Nixon's deputy assistant Alexander Butterfield. Of course, it eventually prompted Nixon to resign, though he was pardoned of all wrongdoing by his successor, Gerald Ford.

Another big televised spectacle, the investigations into the Iran-Contra affair were taken up jointly by special House and Senate committees. Over 41 days of televised hearings, key players in the scandal offered dramatic testimony about the covert arrangement to sell weapons to Iran and funnel the proceeds to Nicaragua's Contra rebels. (Videos via C-SPAN)

The joint hearings shed plenty of light on the scandal but produced few concrete results. The final report was undercut by a dissenting minority report from some Republican committee members, and most of the convictions associated with the scandal were eventually overturned, vacated or pardoned.

The investigation that almost cost Bill Clinton the presidency originated not in Congress, but from the Justice Department — and it cost about 10 times as much as the Benghazi probe. Independent counsel Kenneth Starr's original investigation of the Whitewater land deal morphed into a broader probe of Clinton's alleged wrongdoings — most famously, his affair with Monica Lewinsky. (Video via ABC)

Starr's report formed the groundwork for Clinton's impeachment in the House. Though he was later acquitted of those charges by the Senate, the scandal continues to dog his career. (Video via C-SPAN)

After the Sept. 11 terrorist attacks, Congress commissioned an independent bi-partisan committee to investigate the circumstances that lead up to the attacks. Led by former New Jersey Gov. Thomas Kean, the commission poured through millions of pages of documents and interviewed survivors and high-level officials. (Videos via C-SPAN)

The commission's report provided the definitive account of the attacks and also placed some amount of blame on the FBI and CIA for failing to anticipate the hijackings. The report's recommendations have also influenced the federal government's post-9/11 security reforms.