Ben Carson: What To Know About The Political Newcomer 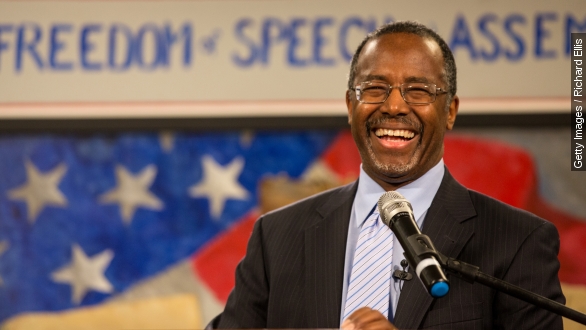 SMS
Ben Carson: What To Know About The Political Newcomer
By Kate Grumke
By Kate Grumke
May 3, 2015
Pediatric neurosurgeon Ben Carson is joining the 2016 presidential race, but his lack of political experience could work against him.
SHOW TRANSCRIPT

Carson first made political headlines in 2013 when he used an opportunity to speak at the National Prayer Breakfast to openly criticize President Obama’s policies, as Obama sat right behind him.

“And now before I get shot let me finish here. … We don’t want to go down the same pathway as other nations who have preceded us. I think particularly about ancient Rome. ... They destroyed themselves. If you don’t think that can happen to America get out your books and start reading,” Carson said.

After that he became a regular contributor to Fox News until the network learned of his presidential ambitions and cut ties back in November.

Carson’s background is a storybook example of the American dream, and he loves to tell it. He grew up in Detroit and was the son of a single mother with a third grade education. (Video via Carson America Exploratory Committee)

“One of the things that I think my mother instilled in me was a sense of responsibility,” Carson said.

His family was extremely poor but his mother pushed Carson and his brother to do well in school. He went on to become a world-renowned pediatric neurosurgeon.

He received the Presidential Medal of Freedom in 2008 for his work in pediatric neurosurgery and for the organization he and his wife started that offers college scholarships. (Video via C-SPAN)

He believes every American should be given a health savings account at birth that the government would contribute to each year, and that could be transferrable between family members. (Video via Carson America Exploratory Committee)

He is also deeply religious and his beliefs guide many of his policy ideas, including a flat-tax rate of between 10 percent and 15 percent that would be based on the biblical principle of tithing.

But, Carson’s lack of political experience has shown at times. He’s caught some backlash for a few comments. (Video via YouTube / FreedomsLighthouse)

“Obamacare is really I think the worst thing that has happened in this nation since slavery, and it is slavery in a way,” said Carson.

“You think being gay is a choice?”

“Because a lot of people who go into prison go in straight and when they come out they’re gay,” Carson said.

Still, Carson is a favorite in conservative circles, placing 4th in the Conservative Political Action Conference’s Straw Poll above many establishment politicians.