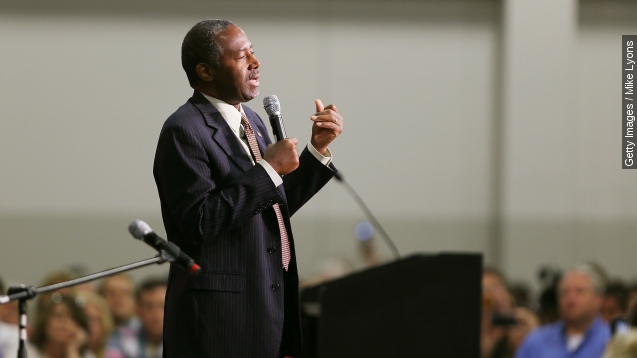 When Republican presidential candidate Ben Carson was asked about African-American voters disagreeing with him, he had this to say:

"I think American blacks, over the course of this next year, will begin to see that they've been manipulated very, very largely," Carson said.

Carson was speaking with conservative talk show host Mike Gallagher. The question was about poll numbers that followed one of his more controversial statements on "Meet the Press." (Video via Carson America)

"So do you believe Islam is consistent with the Constitution?" the "Meet the Press" host asked.

"No, I don't. I do not. I would not advocate that we put a Muslim in charge of this nation," Carson said. (Video via NBC)

A YouGov poll found 66 percent of African-Americans believe "opposing a political candidate for office solely because they are a Muslim" is unfair.

Take out race, though, and 57 percent of people overall in the poll agreed with Carson's statement about having a Muslim president. (Video via Carson America)

Carson hinted that mainstream media was manipulating the public by not reporting the majority in favor of his statement. He also said, "One of the biggest things threatening our nation right now is divisiveness." (Video via Carson America)

According to the latest NBC/Wall Street Journal poll, Carson is trailing Donald Trump by only one percentage point.