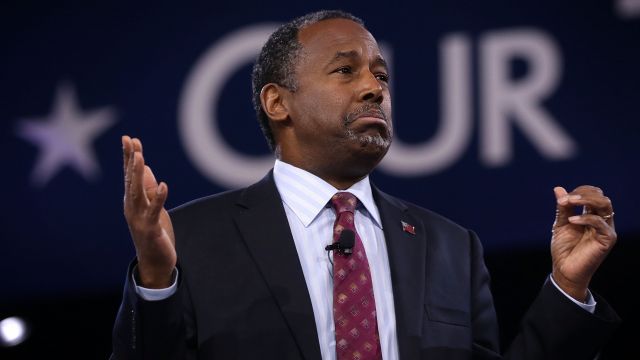 "Even though I might be leaving the campaign trail — you know, there's a lot of people who love me, they just won't vote for me. But it's OK," Ben Carson said.

Dr. Ben Carson is officially no longer running for president. But he's not done with politics just yet.

After sort of dropping out of the presidential race this week, the former neurosurgeon announced at the Conservative Political Action Conference he has accepted a job as the national chairman of My Faith Votes, a nonprofit group devoted to organizing Christian voters.

"Someone's faith is integrated into everything that one does. So it clearly will have an impact on everything they do, including voting," Carson said.

Carson founded his campaign on both his faith and his status as a Washington outsider. He garnered enough support to briefly become the GOP frontrunner, but his campaign failed to retain that momentum, and Carson failed to win a single state by Super Tuesday.

Now, Carson's focusing on making sure his base turns out for elections: My Faith Votes claims more than 25 million registered Christians didn't vote in 2012.

So far, Carson has not endorsed any of the remaining Republican candidates. An NBC poll from February found Carson supporters were most likely to back Sen. Ted Cruz or Donald Trump as their second preference.

This video includes a clip from CNN.