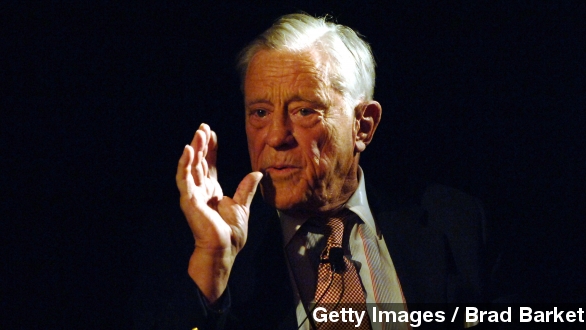 Ben Bradlee, former executive editor of The Washington Post, has died. He was 93.

At the helm of the Post from 1968-1991, he led the paper through some of its most defining moments. He oversaw coverage of the Watergate scandal earning him a portrayal in the Oscar-winning film “All the President’s Men.” (Video via The Washington Post, Warner Bros. / "All The President's Men")

BRADLEE VIA ABC: “These guys were on a roll. They had the town by the throat. Nobody else was touching them.”

During his tenure, he also fought the Nixon administration over his decision to run a trove of leaked documents on the Vietnam War known as the Pentagon Papers.

In September, his wife, fellow Post reporter Sally Quinn, disclosed Bradlee’s Alzheimer’s had gotten worse and he was in hospice care at their home.

SALLY QUINN VIA C-SPAN: “I don’t think we’ve ever been as loving with each other as we are now. You know, we spend a lot of time together, and we hold hands, and he knows me.”

For the past 23 years, he’d carried the title “vice president at large” at the Post. He also published a memoir titled “A Good Life.”