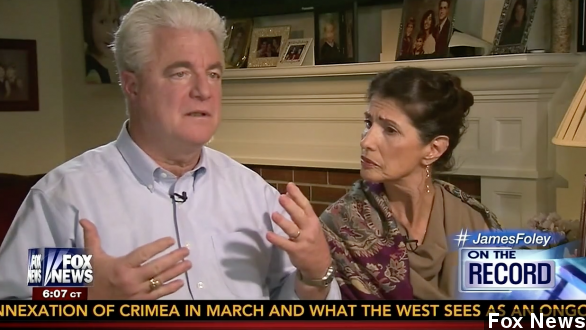 SMS
Beheadings By ISIS Put Spotlight On U.S. Ransom Policy
By Amy Kluber
By Amy Kluber
September 15, 2014
Families of the beheaded journalists say they were warned not to pay ransom to ISIS due to a long-held U.S. policy on negotiating with terrorists.
SHOW TRANSCRIPT

It sounds like a pretty chilling warning: If you pay the ransom for your son's release, you'll go to jail.

But that's exactly how the families of beheaded American journalists Steven Sotloff and James Foley viewed exchanges with U.S. government officials when they tried raising ransom money for their sons' release.

Now, there's not a lot of disagreement about the fact the families had conversations with administration officials — but the White House Chief of Staff Denis McDonough puts it like this:

That's in line with what the State Department has said.

STATE DEPARTMENT SPOKESPERSON MARIE HARF: "It's part of our job to help families in these horrible situations understand America's laws about paying ransom to terrorists."

She's referencing the country's long-held stance of never negotiating with terrorists. The thinking is, doing so might put more Americans at risk of being taken hostage if terrorists know the U.S. will give into their demands.

But as a law professor tells Voice of America, there actually is no such law, saying, "When the United States government says: we don't negotiate with terrorists ... they are making statements about U.S. policy, not something they are compelled to do by law."

When asked about that policy, State Department spokeswoman Marie Harf clarified the U.S. doesn't make concessions with terrorists. What she didn't say was how making negotiations differed from making concessions.

Whatever the policy, a CNN correspondent says it's unlikely an individual would ever be punished for breaking it.

"There is a material support law on the books that would make it illegal for any American to pay a terrorist organization no matter the circumstance, but a prosecution would be highly unlikely."

But not all Western countries are on the same boat. Although both the U.S. and the U.K. say they don't pay ransoms, such payments make up a significant portion of ISIS' funding — particularly from other nations in Europe. (Video via Channel 4)

So this poses a troubling dilemma. As The Guardian puts it, "Other European states' payments save hostages but fuel further abductions by boosting jihadi groups' coffers and effectiveness."

The U.S. government made unsuccessful attempts to save Foley and Sotloff before they were executed. The Foleys did say they do not blame anyone in the U.S. government for what transpired, but they advocate for a change in the tactics to save American hostages in the future.