Beginning Of The End? Perry Can't Afford To Pay His Staff 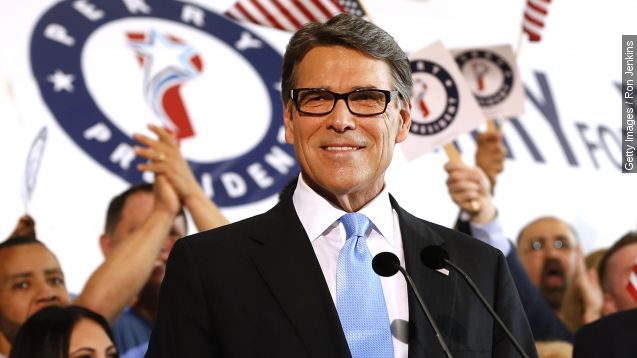 Some staffers have volunteered to continue unpaid. Others have been given the OK to look for other jobs. (Video via The National Press Club)

As Perry's campaign manager put it: "Tough decisions have to be made in respect to both monetary and time related resources."

Translation: Perry doesn't have near the spending advantage of his rivals. His campaign raised just $1.1 million between April and June. (Video via C-SPAN)

By comparison, Ted Cruz had raked in about 13 times as much. (Video via Cruz For President)

"In the race for president, one candidate is very different from the others," said Perry's campaign manager.

But Perry doesn't have to throw in the towel just yet. Three Super PACs backing Perry have raised about $17 million and can help prop up the campaign — unofficially. They're not allowed to coordinate with Perry's staff. (Video Opportunity and Freedom PAC)

Financial problems aside, Perry is polling poorly. So poorly, he was left out of the prime-time GOP debate.

Something he tried to downplay.

"This is not a one-shot pony here. We've got a full campaign in front of us," Perry said on Fox News.

But if it's any consolation for Perry, it's not as though he's the first Republican hopeful to find himself in this situation. (Video via Perry For President)

Back in the summer of 2007, John McCain's campaign was so low on funds, it was forced to make layoffs.