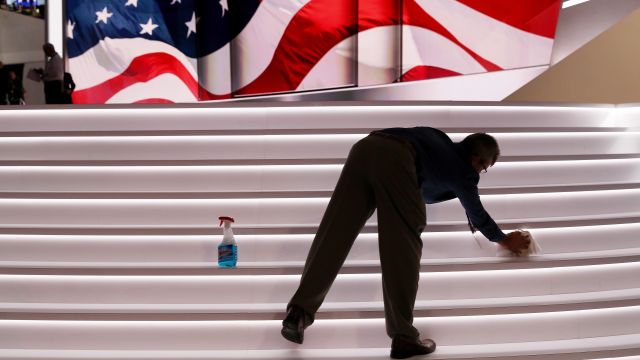 It thrives on cruise ships, in schools, at Chipotle and, apparently this year, it also thrives at the Republican National Convention. We're talking about norovirus.

At least a dozen GOP staffers from California are spending a lot of time in the bathroom this week and, while health officials are still testing samples to confirm, a county health commissioner told media, "It looks like norovirus."

The highly contagious virus resembles your worst nightmare of a stomach bug and is spread through contact with infected people or surfaces or through contaminated food or water.

The virus usually isn't too dangerous, though The Los Angeles Times reports some sick staff members were hospitalized to receive fluids.

Officials say they're doing everything they can to contain it — the staffers with symptoms have been quarantined and "towers of hand sanitizer" have been deployed.

SEE MORE: This Is How Fortified Cleveland Is For The RNC

As for the rest of the California crew in Cleveland this week? They've been told to avoid hand shaking and double dipping.

So far, staffers and delegates from other states have remained norovirus-free.