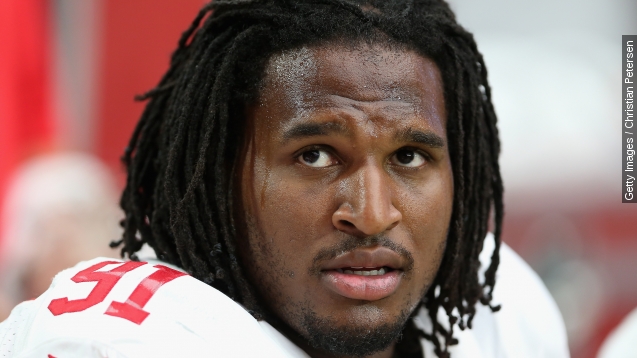 The Chicago Bears have released defensive end Ray McDonald after his arrest Monday on charges of domestic violence and child endangerment.

According to KNTV, McDonald was arrested by California police in Santa Clara early Monday morning at the home of former San Francisco 49ers teammate Justin Smith after officials say he "physically assaulted the victim while she was holding a baby."

This is the latest in a string of allegations against McDonald.

Last August, he was accused of felony domestic violence after he had a fight with his then-fiancee, who was pregnant at the time.

And, in a separate case last December, McDonald was accused of sexual assault. He reportedly hasn't been charged in either case, and he says he's innocent.

"I knew what kind of guy I was and what kind of upbringing I had, and, you know, I respect women. I knew the truth would come out later," McDonald said.

Bears General Manager Ryan Pace said in a statement: "We believe in second chances, but when we signed Ray we were very clear what our expectations were if he was to remain a Bear. He was not able to meet the standard and the decision was made to release him."

In addition to his release from the Bears, McDonald's recent arrest will once again test how the NFL handles domestic violence cases under its new personal conduct policy.

Last year, defensive end Greg Hardy was accused of domestic violence and later convicted. But that decision was overturned on appeal, and the charges against him were dropped when the accuser refused to appear in court. (Video via Charlotte Observer)

The NFL took action anyway, placing Hardy on the commissioner's exempt list. He missed all but one game in the 2014 season.

In February, the league also launched its own investigation into the matter and suspended Hardy for the first 10 games of the 2015 season — meaning, as it stands, he'll miss a total of 25 games.

Meanwhile, last year, the NFL decided not to punish McDonald after his off-field issues surfaced.

The league cleared him in his case after an NFL probe found McDonald didn't violate the personal conduct policy because, they said, there was insufficient evidence.

The NFL personal conduct policy calls for a "standard" six-game suspension for a first violation and a lifetime ban if it happens again. The league has yet to comment on McDonald's recent arrest.