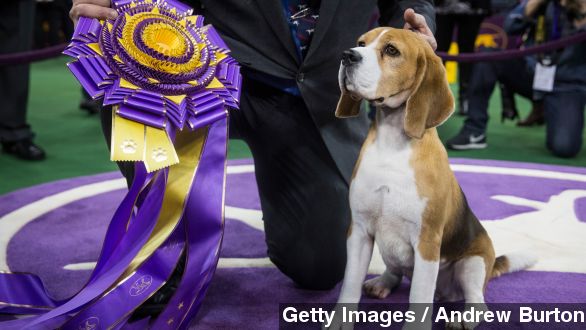 The annual Westminster Dog Show crowned this year's Best in Show Tuesday night at Madison Square Garden. And the winner is...

Miss P’s handler, Will Alexander, was ecstatic. He's quoted in USA Today as saying, "I'm overwhelmed. ... She never let me down. She didn’t make any mistakes. She was wonderful out there."

Miss P became the second of her breed take the title, and she's following in her family's footsteps well.

She's the grand-niece of Uno, who became the first beagle to win the competition in 2008.

Miss P beat out six other expertly-trained and exceptionally-groomed pooches to take the title, including: Flame, Swagger and Matisse. Yeeeah. We can't get enough of these names either.

And, while in NYC, the dogs don't just run laps, they also live in the lap of luxury.

According to the Wall Street Journal, because business is so slow in February, hotel owners "roll out the red carpet" for those pups competing in the show, offering discounts on top-of-the-line lodging near the Garden.

All totaled, more than 2,700 dogs from around the world competed in the annual dog show. So, safe to say, it was pretty ruff competition. Ok, we'll stop. (Video via Vogue)