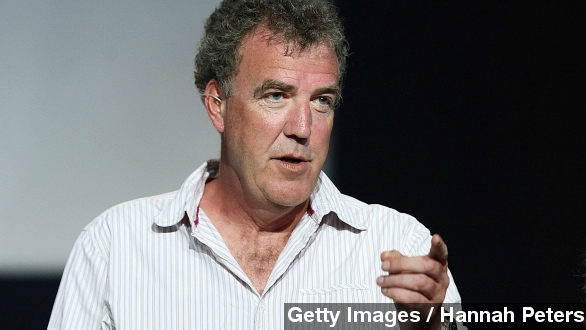 Jeremy Clarkson, host of the BBC car show "Top Gear," has landed himself in hot water with the network over the years for his loose cannon delivery on camera. But his words aren't the only thing getting him in trouble lately.

"He has a full size tattoo of his face on his face," Clarkson said.

Tuesday, the BBC reported the comical yet politically incorrect host of the popular British TV show was suspended after "allegedly hitting a producer" after a heated argument last week.

The network says it has also launched an investigation into the incident, this Sunday's episode will not be broadcast and the other two remaining episodes in the current series could meet the same fate.

Clarkson reacted to his suspension on Twitter jokingly, saying, "Wanted: new presenter for Top Gear. Applicant should be old, badly dressed and pedantic but capable of getting to work on time."

This is just the latest incident where Clarkson's character has been called into question in recent years.

Last May, he was accused of sneaking in a racial slur while singing a nursery rhyme during a show in 2011.

Though Clarkson denied the allegations and claimed it only sounded that way in the audio playback.

And last year, the BBC gave him a "final warning" after, they say, he "deliberately used" racially derogatory language when referring to a Asian man during a broadcast.

"Clarkson and his team have been sort of pushing the BBC. ... But I think there's the point at which the BBC has to, well ... They put him on the naughty step, didn't they?" TV producer Daisy Goodwin said.

"He's been put on the naughty step before. This is the next one," a BBC host said.

'Top Gear' is currently the most widely watched factual television program in the world. More than 350 million people tune in every week in 170 different countries.

And Clarkson definitely has a legion of supporters.

A Change.org petition to reinstate the long-time host has already garnered more than 126,000 signatures in less than 24 hours.