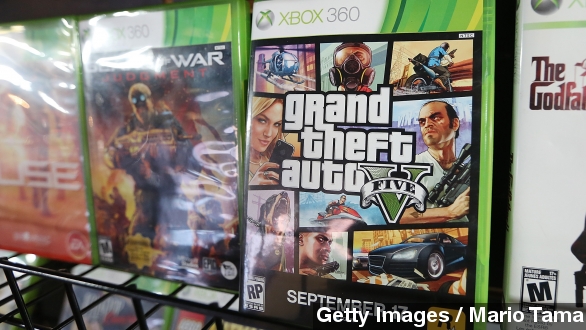 SMS
BBC Making 'Grand Theft Auto' Feature To Promote Tech Jobs
By Ben Lawson
By Ben Lawson
March 12, 2015
The BBC is producing a drama about the making of the GTA video game series to try to get kids interested in coding.
SHOW TRANSCRIPT

The news that the BBC is making a show about the "Grand Theft Auto" video game series is much more boring than it sounds.

It's a 90-minute feature drama that will tell the story of the makers of the blockbuster gaming franchise.

Yeah, a story about making video games doesn't exactly bring the same energy as a story in the vein of the GTA series, which is full of car chases, gun fights and pretty much any other criminal activity you can think of.

"Things could get really messy."

This show is part of the BBC's effort to create more interest in the coding and technology fields.

It announced Thursday that it will be giving every year 7 student in the UK — that's kids around 11 years old — a microcomputer that will allow them to learn the basics of coding.

The BBC says this is in response to a "skills shortage" in Britain's digital industry, so it's hoping to make coding as fundamental as writing in the education system.

And it wants this "Grand Theft Auto" drama to inspire kids to get into the industry. Because that's what every parent wants: for their children to be shaped by a video game where you can kill prostitutes.

Regardless, "GTA" has quite the success story to tell. There have been countless entries in the long-running franchise, and its most recent entry, "Grand Theft Auto V," hit $1 billion in sales in its first three days on the market.

The drama will focus on Sam and Dan Houser, the siblings credited as the driving forces behind the series. (Video via British Academy of Film and Television Arts)

No word yet on when the program will air and whether it will get a U.S. release.