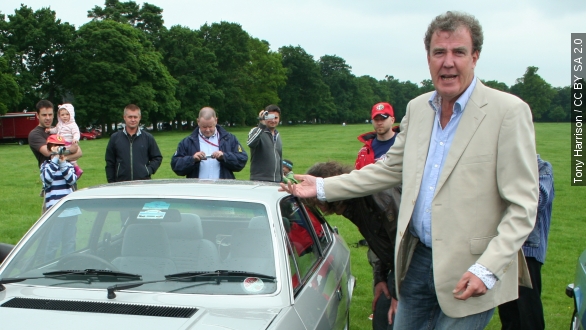 Looks like "Top Gear" host Jeremy Clarkson's recent "fracas" with one of the show's producers has cost him his job — despite a tidal wave of public pressure to keep him.

Wednesday, the BBC officially announced it wouldn't be renewing Clarkson's contract, after an internal investigation concluded he attacked producer Oisin Tymon in a dispute over food earlier this month.

BBC director general Tony Hall said in a statement: "It is with great regret that I have told Jeremy Clarkson today that the BBC will not be renewing his contract. ... For me a line has been crossed. There cannot be one rule for one and one rule for another."

The investigation said the longtime broadcaster and journalist went off on a 20-minute tirade, verbally accosting the producer before hitting him in the face. (Video via Channel 4)

Clarkson, who is both loved and hated for his politically incorrect style, has landed himself in hot water with the network over the years. But he hasn't faced punishment this severe until now.

Last May, he was accused of sneaking in a racial slur while singing a nursery rhyme during a show in 2011, though he denied the allegations.

And last year, the BBC gave him a "final warning" after, they say, he "deliberately used" racially derogatory language when referring to an Asian man during a broadcast.

Still, Clarkson has a legion of supporters, and they're not too happy about his removal as host of the hit car show.

A petition — that started after his suspension earlier this month demanding he be put back in front of the camera — has garnered more than 1 million signatures.

According to The Sun, even Snoop Dogg is a fan of the show and thinks canning Clarkson would be a disaster for the network.

"He isn't part of Top Gear — he is Top Gear. ... The BBC can't afford to (fire Clarkson) — but I guarantee you if he was, every major network in the U.S. would be trying to sign him up to front a car show. He is guaranteed to get big ratings."

Plus, get this: British Prime Minister David Cameron's 11-year-old daughter has even reportedly threatened to go on a hunger strike unless the 54-year-old broadcaster is reinstated.

"He was always controversial. He was always outspoken. And that's the appeal. That's why he's made 'Top Gear' into a best-selling international entertainment program," former 'Top Gear' presenter Chris Goffey said.

And there's probably a lot of truth to that. Since the show was given a reboot in 2002, it has accelerated up the TV rankings.

In 2012, Guinness World Records listed "Top Gear" as the "most widely watched factual TV programme" in the world. More than 350 million people tune in every week in 170 countries. (Video via BBC)

As for who might take over for Clarkson, sources for The Telegraph say BBC higher-ups have taken a liking to Radio 2 "Breakfast Show" host Chris Evans. (Video via RadioTV UK)

Evans is reportedly quite the car enthusiast and boasts a pretty big collection of vehicles himself.

Hall said the BBC will now focus on renewing "Top Gear" for 2016.

This video includes images from Getty Images and music from Kevin MacLeod / CC BY 3.0