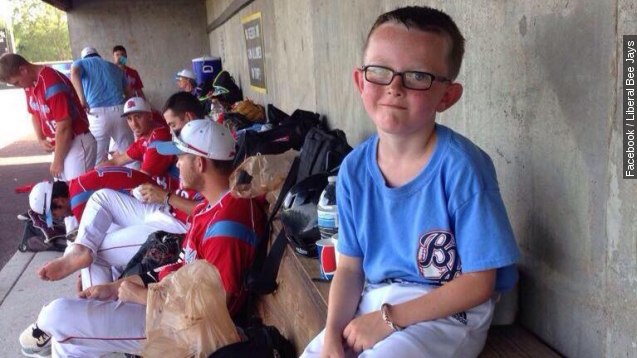 SMS
Batboy's Death Highlights Dangers For Baseball's Bystanders
By Matt Moreno
By Matt Moreno
August 4, 2015
Batboy Kaiser Carlile died after being struck by a player's practice swing, a reminder the sport puts those on the sidelines at risk.
SHOW TRANSCRIPT

The crack of a bat hitting a baseball can cause all sorts of emotions — excitement, satisfaction, maybe even frustration. But one of the worst is fear. (Video via YouTube / Mill City Sports)

"The National Baseball Congress planning to honor a young batboy killed over the weekend. Kaiser Carlile died Sunday. He was hit in the head Saturday by an on-deck batter," KWCH reports.

Participating in just about any sport can increase a player's risk of injury, but baseball has proven time and time again it's not just dangerous for players on the field — it can be dangerous for those watching, too.

This weekend's incident occurred during the World Series for the National Baseball Congress in Wichita, Kansas — a 15-league organization made up of mostly college players keeping in shape and trying to impress scouts. Carlile was wearing a helmet when he was struck and was immediately given CPR by a longtime paramedic who was umpiring the game.

On average, an MLB batter can swing a 2-pound wooden bat between 80 and 90 miles per hour. A ball or fragments off a bat can come off the bat at speeds in excess of 110 miles per hour. (Video via YouTube / Dodger Nation)

Earlier this year in Boston, paramedics rushed a woman to the hospital after shards of a bat flew into the stands and struck her in the face. The woman was listed with "life-threatening" injuries at the time.

Even players can get caught in the line of fire. In 2007, St. Louis Cardinals outfielder Juan Encarnacion suffered a gruesome eye injury after being struck by a foul ball while on the on-deck circle.

Earlier that year, Tulsa Drillers coach Mike Coolbaugh was struck and killed by a line drive while coaching first base, leading baseball to require helmets and not just ballcaps for base coaches.

Baseball, considered one of the "safest" sports for youths, also comes with a great risk according to a study by the Council on Sports Medicine and Fitness.

The 2012 study published in the journal Pediatrics says "the degree of injury severity is relatively high" in baseball because injuries involving the head can be particularly traumatic. Many of the head injuries require surgery.

The National Baseball Congress has suspended the use of batboys since Carlile's death.