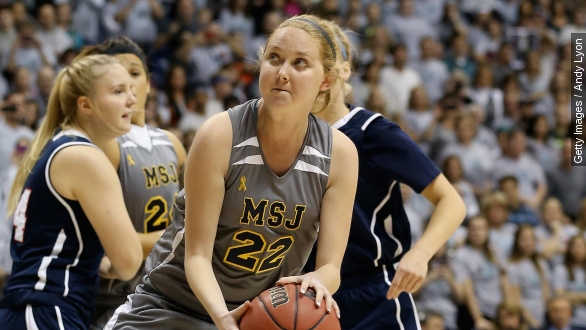 Basketball player Lauren Hill has died after a battle with a rare form of brain cancer. She was 19 years old. (Video via WCPO)

Hill was diagnosed with diffuse intrinsic pontine glioma, a type of brain stem tumor, as a senior in high school. At the time, doctors told her she had two years to live.

She went on to play basketball at Mount St. Joseph University in Cincinnati. She played in four games, the first of which the NCAA moved up in the schedule to ensure she had a chance to play.

"I've always strived to be the best person I can be just because I knew little kids were looking up to me," she said. (Video via WCPO)

Several causes sprang up around Lauren's story, including the nonprofit Lauren's Fight for Cure and the #Layup4Lauren basketball challenge.

Lauren's cause raised $1 million for cancer research. In December, the V Foundation for Cancer Research and ESPN announced a $100,000 grant to fund pediatric brain cancer research in Hill's honor.