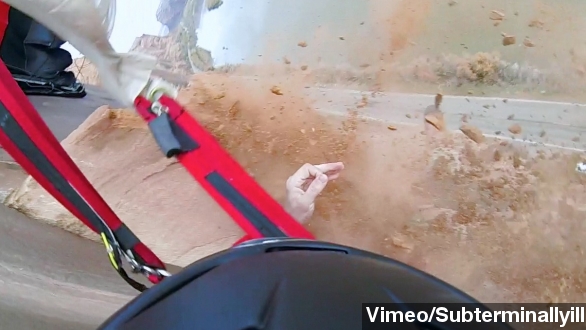 A petrifying and death-defying moment caught on a BASE jumper's helmet camera near Moab, Utah. While this video isn't graphic, some viewers may find it disturbing.

"A BASE jumper lucky to be alive after this leap from a cliff went horribly wrong. He managed to survive! But he did sustain multiple injuries, including a severely sprained back."​ (Via Fox News)

Outside reports more than 180 people have died BASE jumping since 1981, and called it "the world’s deadliest sport."

HowStuffWorks explains BASE jumping is basically the act of people going to the tops of cliffs and manmade objects at low altitudes and, well, jumping. There is very little time to deploy the parachute, let alone deal with an unforseen issue, like ... running into the side of the cliff like we just witnessed.

The video of the crash was filmed on November 24th and a nearly four-minute video is up on Vimeo.

It shows the crash repeatedly and in slow motion. Here, you see the first impact when the BASE jumper hit a ledge. An update on the video summary says:

Well, ouch. That definitely had to hurt.

Commenters on the Vimeo page were wishing the jumper a speedy recovery.

That BASE jumper isn't the first to have a serious injury in the Moab, Utah area this year. This man nearly lost his leg after his BASE jump. (Via YouTube)