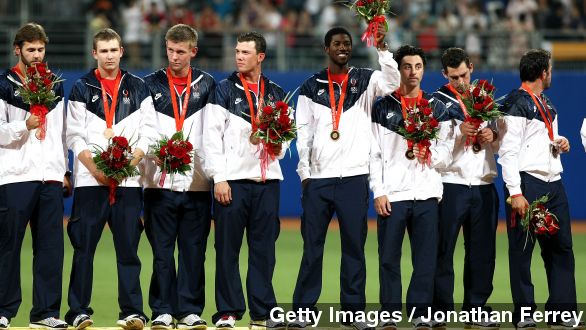 If you're a fan of baseball or softball and a fan of the Olympics, and you've been wanting to combine those two passions since Beijing in 2008, have we got news for you!

Monday the International Olympics Committee voted in Monaco to allow the possibility of baseball and softball to return to the sporting lineup of the 2020 Olympics by getting rid of the previous 28-sport limit.

The IOC cut the two sports in 2005 by a narrow margin — baseball missing the cut by three votes and softball by one. That vote effectively knocked the sports out of the 2012 and upcoming 2016 Summer Olympics in Rio. (Video via BBC)

But the 2020 Summer Olympics are happening in Tokyo, and Japan is one of the most baseball-crazy countries in the world, so it's a likely host nation to push for the two sports. (Video via YouTube / Where's Andrew?)

Many of the decisions coming out of the IOC's meeting seemed aimed at relaxing a number of rules surrounding the Olympics.

One notable decision opened the door to letting hosts essentially outsource certain events. For example, the Korean town of Pyeongchang is hosting the next Winter Olympics but might not have to build new facilities for bobsledding and skeleton because those sports aren't popular in Korea. (Video via Arirang)

Instead, those events could be held in nearby Japan, which would keep Pyeongchang from building a multimillion-dollar facility that would likely only be used for the Olympics.

The IOC also allowed for the possibility of two cities hosting the Olympics jointly, and one partnership that's been floated is Los Angeles-San Francisco, two cities in the final four of candidates for the U.S.' official 2024 bid. (Video via Expedia)

Those two last changes appear to be in the interest of lowering the exorbitant cost of putting on the Olympic Games, which just cost Russia tens of billions of dollars for Sochi this past winter.

As Philip Hersh wrote for the Chicago Tribune, "The need to do that became more pressing when several cities, including Oslo, Stockholm and Munich, dropped out of the race for the 2022 Olympics out of financial fears."

The IOC's session in Monaco runs through Tuesday.