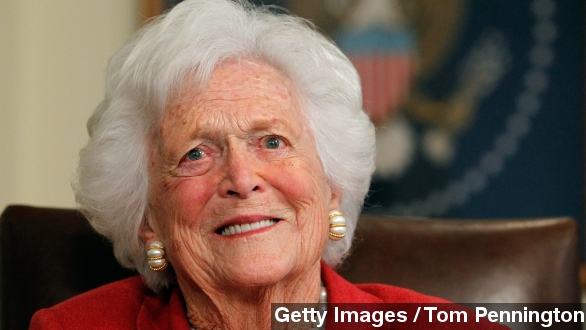 Two years ago, she didn’t quite feel the same way. On the Today show she said that there had been enough Bush’s in the White House. “There’s other people out there who are very qualified and we’ve had enough Bush’s,” said Barbara Bush.

But at a gala Friday, the Bush matriarch told an audience via Skype, “I changed my mind.” She said the nation’s problems were so big, “it doesn’t matter what your last name is.”

Her change of heart comes at a time when Jeb Bush needs some good news. This past week has been a series of political gaffes for the 2016 Presidential hopeful.

After the hire, Buzzfeed reported that Czahor had deleted tweets that disparaged women and gay men. The next day Czahor resigned.

Then, Bush’s camp published thousands of emails from his time as Governor. The move was in the name of transparency, but it turned out some of the emails contained sensitive personal information of Florida residents.

Newsy spoke to Identity Finder, the company that audited JebBushEmails.com. The data security firm says there were 333K total emails in the database. In those emails, 12,812 names and Social Security numbers were leaked. The vast majority — 12,594 — came from an attachment in just one email that contained names, birth dates and SSN's.

Despite his rough week, Bush is reportedly blowing away the other 2016 Republican Presidential hopefuls as far as fundraising goes with The Washington Post expecting him to have tens of millions of dollars on hand by spring.