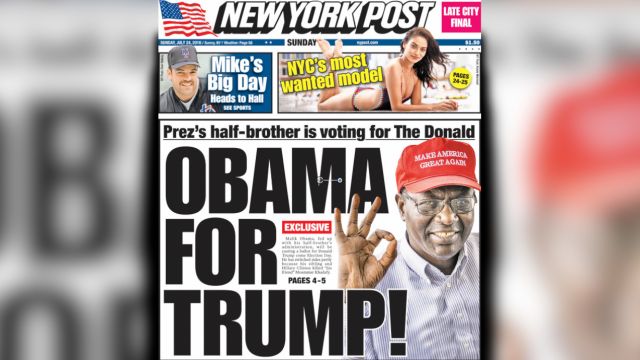 He reportedly told The Post: "I like Donald Trump because he speaks from the heart. Make America Great Again is a great slogan. I would like to meet him."

"We cannot afford to be so politically correct anymore," Trump said during his speech at the Republican National Convention.

Trump responded on Twitter with: "Wow, President Obama's brother, Malik, just announced that he is voting for me. Was probably treated badly by president-like everybody else!"

"We cannot find a case that would support bringing criminal charges on these facts," FBI Director James Comey said.

Malik Obama said the FBI's decision not to charge Democratic challenger Hillary Clinton with a crime over her email server scandal was the tipping point that led him to support his half brother's rival party.

Malik Obama's always been outspoken about his relationship with his half brother over the years. He also hasn't been afraid to criticize his decisions.

Malik Obama also released a letter purportedly from his presidential relative that said Barack Obama first got into politics to "deal with some serious issues blacks face here."

He's also come out and said that Barack Obama is "not an honest man."

Malik Obama is reportedly registered to vote in Maryland, where he worked as an accountant for many years, and he plans to travel back for November's election.

This video includes a clip from Al Qarra images from Getty Images.