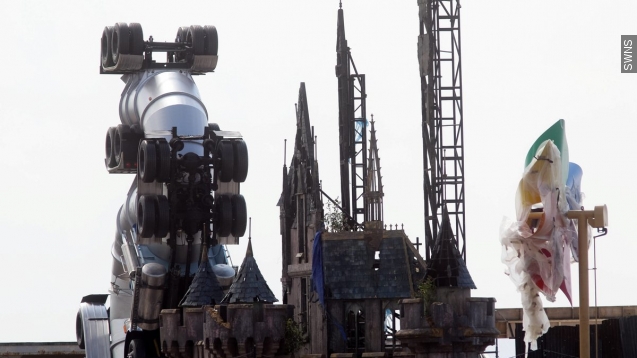 If you happen to be traveling to Weston-super-Mare in Somerset, England, this weekend, you're in for quite a treat.

That's because it has been confirmed anonymous street artist Banksy is opening a pop-up exhibition there called "Dismaland."

The name is a dark play on Disneyland. But it's also the title of a 2012 Banksy artwork, which means this project has likely been in the works for quite a while.

Security had been really tight on the project, and locals had been told the site was a movie set for a film called "Grey Fox."

Banksy told The Guardian he isn't trying to attack Mickey and his friends — at least not too much.

He said, "It's a showcase for the best artists I could imagine, apart from the two who turned me down."

The exhibit features dull colors and a lot of sarcasm. For example, the remote-controlled boats are filled with figures representing immigrants.

Banksy told the Weston Mercury, "I hope everyone from Weston will take the opportunity to once more stand in a puddle of murky water eating cold chips to the sound of crying children."

This video includes images from Instagram and music from Birocratic / CC BY ND 3.0.