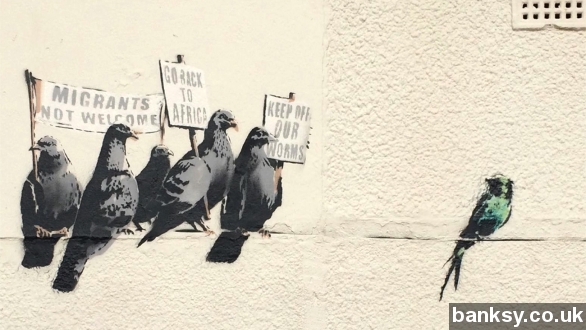 By Sebastian Martinez
October 2, 2014
An English city council's decision to scrub a Banksy painting off a wall in its town has made headlines, but there's a local context for it.
SHOW TRANSCRIPT

Council members for a coastal English resort town might be ruing their mistake after washing away a painting — potentially worth hundreds of thousands of dollars — by graffiti artist Banksy.

The painting shows a group of birds toting signs with anti-immigration messages aimed at a more exotic bird — which The Guardian tentatively identified as a migratory swallow.

A spokesperson of the council of the town — Clacton-on-Sea — said the council had received a complaint that it was racist and, not knowing it was a Banksy, decided to wash it off. He said, "We would obviously welcome an appropriate Banksy original on any of our seafronts and would be delighted if he returned in the future."

Which pretty clearly shows, in addition to not knowing they had a Banksy on their hands, the council apparently doesn't really know how the elusive street artist works.

Banksy has made a name for himself through his subversive, political and often impermanent works of street art, graffiti or vandalism, depending who you talk to. (Video via The Webby Awards)

The birds painting definitely falls into the political category as it comes during a local election when immigration has been a hot-button issue. (Video via Channel 4)

The local member of Parliament, Douglas Carswell, announced a month ago he was switching from the Conservative Party to the United Kingdom Independence Party, or UKIP — whose anti-immigrant platform is seen as even farther to the right of the Conservatives. (Video via The Guardian)

And some of the politicians in the running in the election said politics could've played a part in the destruction of Banksy's piece.

CHRIS SOUTHALL VIA BBC: "I mean, I can't make up my mind whether that was UKIP, because it's aimed at them, of course."

ANDY GRAHAM VIA BBC: "Well, it's a Conservative-run council for a start off, free speech is so important, and I think it's a bit of fun. ... I think it was a little mean, to say the least."

But the political nature of the painting hasn't grabbed nearly as much attention as the council's decision to destroy it, with The Telegraph describing the council as "bungling" for missing out on what it says could've been a £400,000 painting that could've drawn tourism.

The painting is far from the first Banksy work to be destroyed, knowingly or otherwise, and a spokesperson for the artist told The Guardian he would not be commenting on the council's decision.