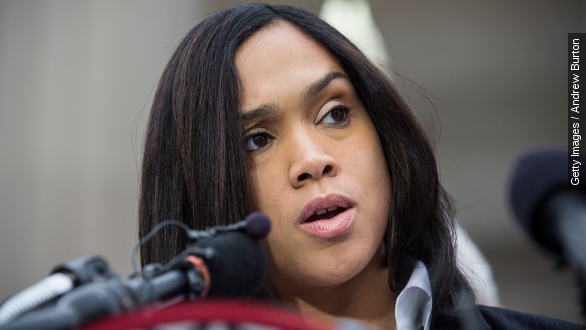 Baltimore State Attorney Marilyn Mosby had some stern words Friday for the law enforcement officials who leaked confidential information to the press regarding the death of 25-year-old Freddie Gray.

“I strongly condemn anyone in law enforcement with access to trial evidence who has leaked information prior to the resolution of this case. You are only damaging our ability to conduct a fair and impartial process for all parties involved." said Mosby.

Those strong words were likely spurred by this report from The Washington Post. The Post cites a police document provided by an anonymous source. That document details an account from a prisoner who was in the police van during Gray's arrest. That prisoner said Gray was intentionally trying to injure himself while inside the van. (Vide via WMAR)

Very little information regarding the events leading up to Gray's death had been released prior to that report being published on April 29. Just days before that riots in Baltimore resulted in looting, injuries to police and several building fires.

The Washington Post does warn that "It is not clear whether any additional evidence backs up the prisoner’s version, which is just one piece of a much larger probe."

The Post doesn't disclose the name of the prisoner making the claims to protect that individual's safety nor does it reveal where the document came from so it was approached with skepticism following its publication.

“Leaks like this always serve somebody’s purpose. We have no idea who gave this to The Washington Post or what their interests are in having done so,” said MSNBC's Rachel Maddow.

"We have reported that there is no medical evidence that Freddie Gray suffered any injury that would indicate he injured himself," said WBAL's Jayne Miller.

WBAL eventually tracked down the other prisoner in the van with Gray who said his statement was only speculation since he couldn't technically see Gray.

In the past we have seen police release incorrect information to the press. Take the shooting of 12-year-old Tamir Rice in Cleveland. Police said Rice raised a fake gun at officers, and officers gave Rice three verbal warnings before he was shot and killed. A surveillance video later contradicted that claim.

Mosby did not directly address the report or the claims within it but her taking the time to blast the leak just after listing charges for the six officers allegedly involved in Gray's arrest shows that it might not have revealed the complete picture.

"I hope that as we move forward with this case everyone will respect due process and refrain from doing anything that will jeopardize our ability to seek justice,” said Mosby.