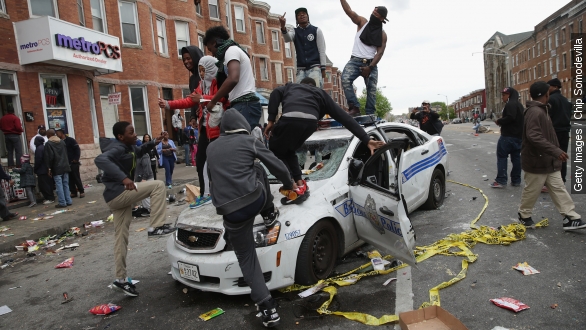 “Too many people have spent generations building up this city for it to be destroyed by thugs,” Baltimore Mayor Stephanie Rawlings-Blake said at a press conference.

After facing heavy criticism from the media, Baltimore Mayor Stephanie Rawlings-Blake had harsh words for rioters in Baltimore Monday evening.

“We are deploying every resource to gain control of this situation and to ensure peace moving forward,” Rawlings-Blake said.

Rioters clashed with police Monday following the funeral of Freddie Gray, a 25-year-old man who died while in police custody.

At least 15 Baltimore police officers were injured in the violence. Local businesses were looted, and multiple buildings were set ablaze. Police say at least 27 people have been arrested so far.

Before her statement Monday evening, Rawlings-Blake had taken a lot of criticism from the media for not having a presence as the situation escalated.

“Where is the mayor? Where is the people that are supposed be representing us,” one demonstrator said.

“There’s a total failure of leadership here. People can look at the scenes and they know that there’s a city of control on the ground. But it’s also out of control at the level of governance,” Fox News' Charles Krauthhammer said.

A statement from the mayor over the weekend prompted a lot of the accusations, with critics saying it showed she was taking a "hands off" approach.

“It’s a very delicate balancing act because, while we try to make sure that they were protected … we also gave those who wished to destroy space to do that as well,” Rawlings-Blake said.

Her office later clarified her comment, saying it was about allowing peaceful protests, not about letting looters run rampant.

In addition to police, members of the community also set out to stop the violence and looting.

One group, called the 300 Men March, patrolled the streets urging all parties to resolve the situation peacefully. (Video via WJLA)