Balloons Will Bring Internet To Remote Areas Of Indonesia 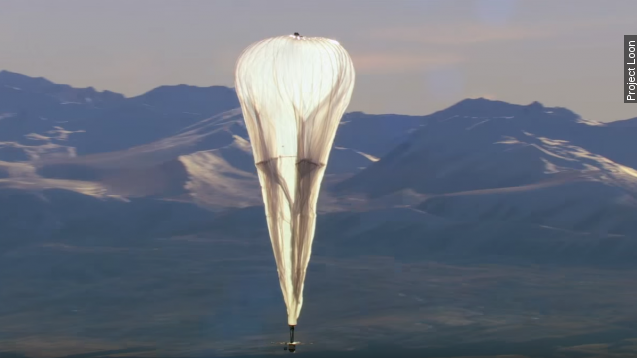 SMS
Balloons Will Bring Internet To Remote Areas Of Indonesia
By Katie Link
By Katie Link
October 29, 2015
Alphabet's Project Loon aims to release giant balloons that will beam the Internet to millions of people across the islands of Indonesia.
SHOW TRANSCRIPT

For millions of people in Indonesia, the Internet could soon be floating above their heads.

"The goal of Project Loon is to bring Internet to the almost two out of three people in the world who don't have Internet access today. And we're doing that using high-altitude balloons," Project Lead Mike Cassidy said. (Video via Project Loon)

Yeah, you heard him right. Alphabet, Google's parent company, is bringing the Internet to people in remote areas via a network of balloons. They've tried it out a couple places, and on Thursday, Project Loon announced a new effort to bring Internet access to nearly 100 million people living among the 17,000 islands of Indonesia.

Recent numbers show only about 29 percent of Indonesians have access to the Internet, and when they do, it moves at a snail's pace. But Project Loon will test out more widespread Internet delivery with the help of three Indonesian Internet service providers.

Here's how it works. Balloons are sent up into the stratosphere. Software moves them up or down to find the right wind direction based on where the balloon needs to travel. Once in place, the balloon beams an Internet connection to antennas on the ground. People on the ground just need a mobile device to access it.

"So our goal for these balloon flights is to stay aloft for about 100 days or three laps around the globe," Project Loon Manager Pam Desrochers said.

If all goes according to plan in Indonesia, Project Loon has identified some other lofty goals. The project's vice president told BBC, "We hope next year to build our first continuous ring around the world, and to have some sort of continuous coverage for certain regions."

By the way, a continuous ring around the world? Yeah, that only takes 300 of the giant balloons.