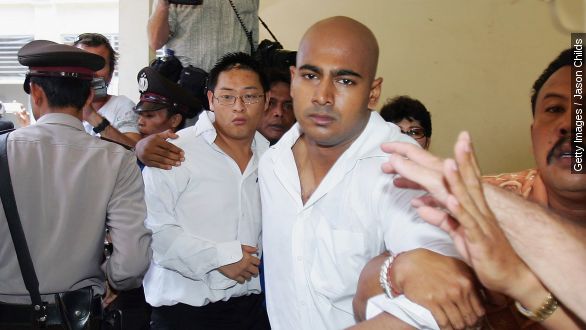 Indonesia has executed a group of drug convicts who were on death row.

The prisoners, who are mostly foreign, were put to death by firing squad early Wednesday morning on Nusakambangan Island, home to a prison referred to as "the Alcatraz of Indonesia." (Video via Euronews)

Two of the offenders executed, Australians Andrew Chan and Myuran Sukumaran, were the leaders of a drug ring known as the Bali Nine. They were arrested in 2005 for their roles in attempting to smuggle more than $3 million (USD) worth of heroin from Indonesia to Australia.

The following year, the two were convicted and sentenced to death. Seven other members of the Bali Nine are serving life sentences or 20 years in prison.

Indonesian President Joko Widodo denied the inmates clemency. That's been the impetus of widespread condemnation from prisoners' families, protesters, public figures and foreign leaders who say the death penalty is too harsh for their crimes.

"Our shared hope is that the Indonesian government will show mercy to Andrew and Myuran," Australian Foreign Minister Julie Bishop said.

One group, called the Mercy Campaign, claimed to have gathered more than 205,000 signatures in hopes Indonesian leaders would reconsider the executions.

Still, Widodo did not back down. He claims the threat of the death penalty is essential in the fight against Indonesia's massive drug problem, which he says is responsible for the deaths of about 50 young people in the country every day. (Video via Al Jazeera)

Prior to his execution, Andrew Chan was allowed to get married in prison Monday. Indonesian officials say it was his "final wish."