Backstreet Boys And NSYNC Are Teaming Up To Kill Zombies 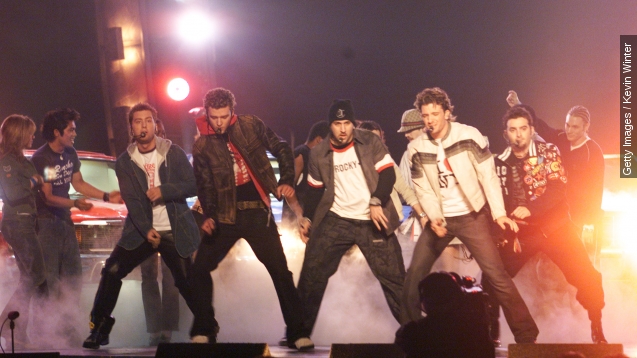 SMS
Backstreet Boys And NSYNC Are Teaming Up To Kill Zombies
By Lexie Hammesfahr
By Lexie Hammesfahr
August 19, 2015
Syfy's film "Dead 7" stars more 2000s boy band members than we can wrap our head around. And that's why it could be the next "Sharknado."
SHOW TRANSCRIPT

This could be either the ultimate boy band reunion or an epic movie failure.

In case you missed it, devout fans of two rival boy bands from the 2000s will find common ground in Syfy channel’s upcoming “Dead 7” movie. (Videos via Jive Records)

Select members of Backstreet Boys and 'N Sync will star in this larger-than-life zombie Western.

See what I did there? This film brings together some of the most memorable boy band members millennials listened to as kids.

Thanks to some on set Instagram posts this week, we’ve learned O-Town's Trevor Penick and 98 Degrees member Jeff Timmons are also part of the cast.

And Nick Carter, who also wrote the script, reached out to Hunter Hayes, Niall Horan, Nick Lachey and Ja Rule on Twitter in the hopes they would join.

It's exciting and kind of a relief to see the guys putting on a united front, and it would be great if this movie became the next "Sharknado" success story. But looking at other movies starring pop stars, it's not going to be easy.

"From Justin to Kelly," which starred Kelly Clarkson and Justin Guarini, is ranked as the 20th worst opening of all time. It only spent five weekends in theaters and made $4.9 million.

The one outlier is "Crossroads" starring Britney Spears, which grossed $61 million worldwide.

“Dead 7” will air on TV, so we won’t be able to compare box office numbers. But I would personally love to see Joey Fatone and A.J. McLean battle zombies in more than one film, and with the help of nostalgia, it just might happen.