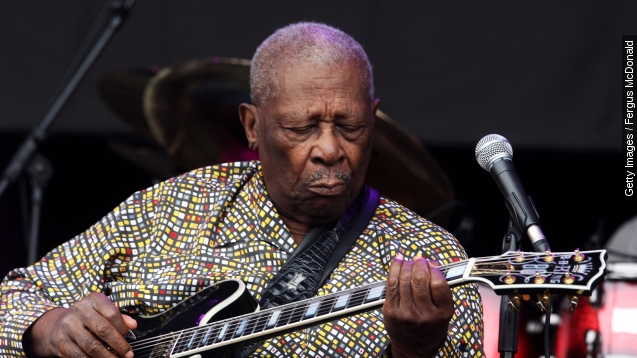 SMS
B.B. King's Daughters Say Manager, Assistant Poisoned Him
By Katherine Biek
By Katherine Biek
May 26, 2015
According to court documents, two of B.B. King's daughters allege their late father was poisoned by his business manager and personal assistant.
SHOW TRANSCRIPT

B.B. King died in his sleep in Las Vegas on May 14th, but now two of his daughters are alleging their father was poisoned.

E! obtained court documents written by Karen Williams and Patty King, which say, "I believe my father was poisoned and that he was administered foreign substances to induce his premature death."

Williams and King claim in those documents that their father's business manager, who has power-of-attorney over their father's estate, and King's personal assistant were the ones who poisoned him.

King's specific cause of death was listed as multi-infarct dementia, which the U.S. National Library of Medicine lists as the second most common form of dementia.

Despite a lack of initial evidence, a tweet from Clark County said a second autopsy was performed.

If the coroner finds evidence to substantiate the claims that King didn't die of natural causes, only then will the Las Vegas Metropolitan Police Department begin an investigation NBC reports.

The Washington Post spoke with William and King's attorney who said her clients were concerned because their father, according to them, wasn't bathed or fed in the days leading up to his death and they were prevented from seeing him.

The lawyer told the Post, "Mr. King died alone with no family. ... They want answers. They have reasonable suspicion there was foul play."

And the BBC reports that earlier this year, three of King's children accused their father's business manager of neglect, but the court dismissed the case because there was a lack of evidence.

The results from the second autopsy will take around six to eight weeks.