Azerbaijani And Armenian Forces Clash In A Disputed Region 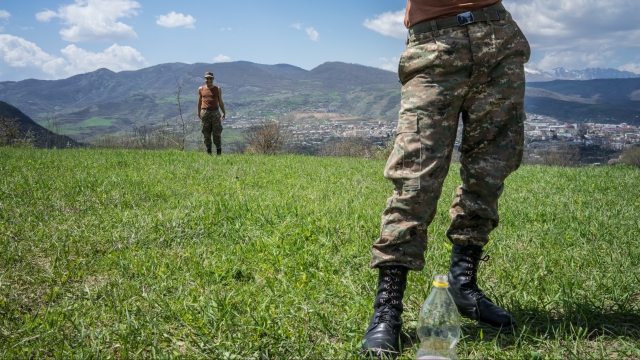 Several people are dead after fighting broke out between Azerbaijan and Armenia, and neither side is willing to claim responsibility.

The two countries have a violent history, but this recent spike in violence violates a cease-fire that was agreed upon in 1994.

The forces are clashing in Nagorno-Karabakh — a disputed region technically in Azerbaijan but controlled by Armenia. That control includes funding of Karabakh forces.

The Karabakh Ministry of Defense claimed it killed 200 Azerbaijan soldiers and destroyed a helicopter.

It's not clear how many Armenian soldiers died in the fighting. The country's president claims at least 18 were killed, but Azerbaijan media report 100 died.

Armenia's Ministry of Defense said it "expects immediate and targeted intervention [from the international community] to keep the situation under control and avoid large-scale military operations."

Organization for Security and Co-operation in Europe — one of the main groups mediating peace efforts in the region — said, "There is no alternative to a peaceful negotiated solution of the conflict and that war is not an option."

Before this clash, the U.S. and Azerbaijan met over counterterrorism efforts but also addressed the tension between Armenia and Azerbaijan.

U.S. Secretary of State John Kerry said Thursday, "We want to see an ultimate resolution of the frozen conflict of Nagorno-Karabakh that needs to be a negotiated settlement and something that has to be worked on over time."

On Friday, Azerbaijan's president tweeted, "The conflict between Armenia and Azerbaijan must be resolved based on United Nations Security Council resolutions and the principle of territorial integrity."

This video includes clips from Karabakh Ministry of Defense, ARTSAKH TV and Azatutyun Radiokayan and images from Getty Images.