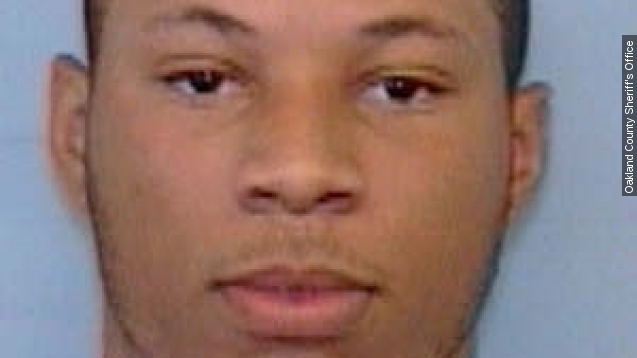 An AWOL Marine at the center of a manhunt called in to a Michigan news station Tuesday evening to tell his side of the story. (Image via Oakland County Sheriff's Office)

"No, I am not armed. ... I left base because I have, like, other issues going on right now. But I left base from, like, just, like, stress. I just didn't want to be there at the moment," Clenard Alex Gee-Simmons told WXYZ.

Newsy's partners at WXYZ report Gee-Simmons had posted on his Facebook page before that, "Has someone ever made you so mad that you feel like wiping out them and their whole entire family?"

Authorities believe that was a threat being made toward Gee-Simmons' estranged wife, who lives in Pontiac, Michigan, and that he's now on his way to find her, carrying with him an AK-47.

But Gee-Simmons told a WXYZ reporter that his Facebook post has been taken out of context and he regrets what he wrote. He said he wasn't traveling to Michigan. Instead, he told WXYZ he's traveling "very far south" but refused specify where he's heading.

"I'm going to turn myself in. But just not right now," Gee-Simmons said.

"So who are you going to turn yourself in to?" the WXYZ reporter asked.

"Well, I'm going to drive back onto base and at right there at the main gate, tell them where I'm at," Gee-Simmons said.

As of Wednesday morning, Gee-Simmons has not turned himself in to authorities.

This video includes an image from the Oakland County Sheriff's Office.