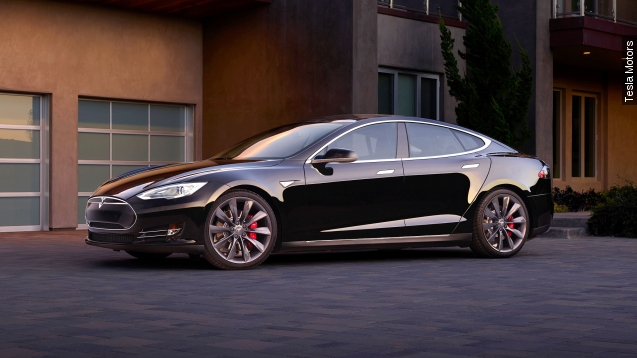 Instead, the company broke Consumer Report’s ratings system with its new Model S P85D, which scored a 103 out of 100.

You’re probably wondering how that’s even possible. Consumer Reports said it had to overhaul its ratings system just to accommodate the P85D’s unique combination of performance and efficiency. (Video via Tesla Motors)

“This fully electric car is a glimpse into the future of the automotive industry. With the most advanced safety features, over the air updates and world class performance, all without consuming a drop of gasoline.” (Video via Consumer Reports)

OK, that sounds pretty good. But exactly how good is it?

For starters, the electric vehicle gets the equivalent of 87 miles per gallon and does it without sacrificing any horsepower. (Video via Tesla Motors)

The P85D can go from 0 to 60 in 3.5 seconds, more than twice as fast as James Bond’s signature Aston Martin DB5. (Video via Columbia Pictures / "Skyfall")

Despite the better-than-perfect score, Consumer Reports points out that doesn’t make the new Tesla a perfect car.

“The interior materials aren’t as opulent as other high-ticket automobiles, and its ride is firmer and louder than our base Model S.” (Video via Consumer Reports)

The car also comes with a six-figure price tag — $127,820. So unless you’re rich like Tesla CEO Elon Musk, you probably won’t get the chance to own one.

Still, the car is being hailed as the car of the future. And if you just have to have yourself a Tesla without the hefty cost, the company plans to release a sedan called the Model 3 for just $35,000 in 2018. (Video via Tesla Motors)