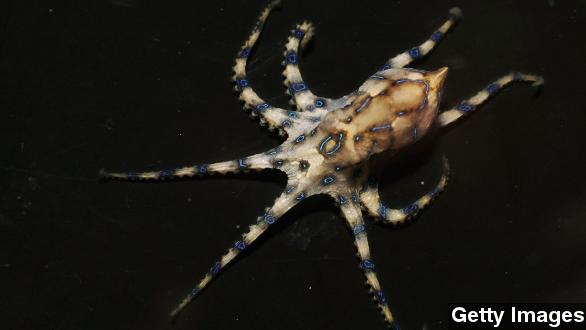 SMS
Awesome New Camouflage Sheet Was Inspired By Octopus Skin
By Briana Koeneman
By Briana Koeneman
August 19, 2014
Scientists have developed a new device that mimics the way octopuses blend in with their surroundings to hide from dangerous predators.
SHOW TRANSCRIPT

Octopuses and squids are known for their ability to blend in with their surroundings at the drop of a hat to hide from dangerous predators.

And now, scientists inspired by their impressive camouflage techniques are working on a device that could make us humans just as adept at staying hidden. (Video via YouTube / et/ufo disclosure)

So far, it only changes from black to white and back again, which doesn't even come close to the multitude of colors an octopus's skin is capable of shifting to. (Video via National Geographic)

But it seems to be a solid step toward developing a sea creature-inspired camouflage material for human use.

One of the lead scientists on the project told the BBC their current device is more about proof of principle. "It's nothing close to being ready to deploy. ... It's really a beginning point, to focus on the engineering science around how you might create systems that have this type of function."

The science behind this new device is complex, but to put it simply, the magic is all in its layers.

There's a light-detecting sheet at the bottom with a silver layer on top of that that gives the device its shiny white base. And on top of that is a sheet of diodes that heats dye located in the top layer. That dye appears to be black at low temperatures and clear at high temps. And the whole thing is mounted on a flexible base.

Someday, the researchers say they hope their method can be used to design military vehicles that can automatically camouflage themselves.

And other research in recent years has focused on providing a similar benefit for the military.

Back in 2011, BAE Systems announced the creation of ADAPTIV, a form of camouflage that can be used to trick heat-sensing technology.

According to its designers, ADAPTIV can make a CV90 light tank completely invisible to thermal sensors or even make it look like something else entirely, like a cow. Yes, a cow. (Video via YouTube / defenseupdate)

The creators of this newest device say they have a lot more work to do on the device. But one of the lead researchers told National Geographic he doubts they'll ever make something that truly acts like an octopus's skin.

"As an engineer looking at movies of squid, octopuses, and cuttlefish, you just [realize] that you're not going to get close to that level of sophistication. We tried to abstract the same principles and do the best we can with what we've got."

The research on the new color-changing device was presented this week in the journal PNAS.