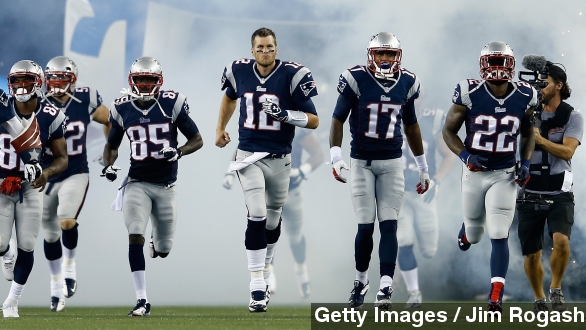 The New England Patriots — as much as any team in the brand-heavy NFL — are a powerhouse brand. But while the team tried to promote that brand Thursday, its image took a hit.

As the first NFL team to achieve 1 million followers on Twitter, the team wanted to reward its fans. Retweet this message, and we'll auto reply putting your Twitter handle as the jersey name. Fans seemed to love it, hitting retweet more than 8,500 times as of early Friday morning.

SORBONI BANERJEE, WFXT ANCHOR: "But last night when the Patriots tweeted out the winner, the Twitter handle featured a racial slur. The Pats later deleted the tweet and apologized saying their filtering system failed."

But as is always the case with social media gaffes, the team did not delete the tweet before lots and lots of screengrabs got out. For about an hour, the team's account had a tweet and custom jersey up thanking someone with a handle that included the N-word.

As you heard, the team quickly tweeted an apology saying its filtering system failed and "we will be more vigilant in the future."

To be fair, the reasoning behind the gaffe seems legit since one of the letters in the slur was simply a lowercase "L" that looked a whole lot like an uppercase "I." It's the apparent lack of thinking these things through, though, that tends to get these big brands in trouble.

For instance, when Florida State decided to hold a Twitter Q&A session with star quarterback Jameis Winston in August only months after sexual assault and larceny allegations surfaced. That social media campaign quickly turned snarky at best, vicious at worst.

Or when the much-maligned Malaysia Airlines briefly offered free flights and iPads in early September to the winners of a "My Ultimate Bucket List" competition. The airline saw two planes go down this year killing hundreds on board. (Video via Euronews)

Perhaps SB Nation put it best in regards to the Patriots' gaffe.