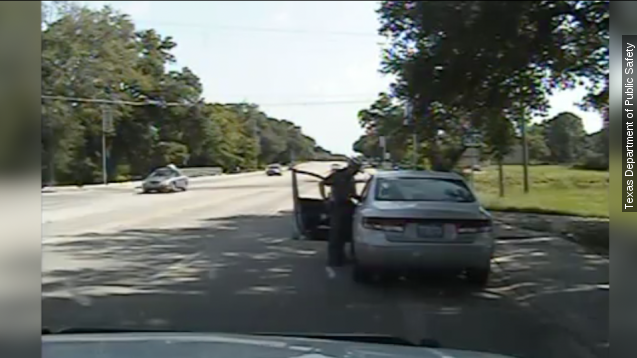 SMS
Will Dashboard Video Affect Bland Case?
By Jake Godin
By Jake Godin
July 22, 2015
Sandra Bland died while in police custody and her death was ruled a suicide. Now authorities are investigating it as closely as murder.
SHOW TRANSCRIPT

The Texas Department of Public Safety has released the dashboard camera footage, showing the moments of Sandra Bland’s arrest.

Then, pointing his taser at Bland, the officer says, "Get out of the car. I will light you up. Get out. Now."

Some noted that parts of the 52-minute long dashboard video appeared to have been edited, though the Texas Department of Public Safety told NBC the errors were due to a "technical issue during posting."

Later Wednesday, KTRK obtained a voicemail Bland left for a friend from the Waller County jail where she was detained.

"Hey this is me. I'm, um, I was just able to see the judge. I don't really know. ... I'm still just at a loss for words honestly about this whole process. How this switching lanes with no signal turned into all of this, I don't even know," Bland says in the voicemail.

CNN reports the voicemail is significant because the phone in Bland's cell wasn't working well and she had to ask staff to come out of her cell to make calls. She reportedly grew frustrated with the lack of communication with friends and family.

While the death of Bland in the cell has been ruled a suicide, the case is now being investigated by Texas Rangers under supervision from the FBI. (Video via KCBD)

"This investigation is still being treated just as it would be in a murder investigation ..." Waller County District Attorney Elton Mathis told reporters.

Footage released by the Waller County Sheriff's Office shows surveillance video outside Bland's cell when her body was discovered.

Protesters are still skeptical, though.

"There are many questions and few answers about how Miss Bland died. Let us be clear, we are not satisfied with the explanation that she committed suicide."

Bland had been charged with assaulting a public servant.