Authorities Rescue 276 Dogs From A Home In New Jersey 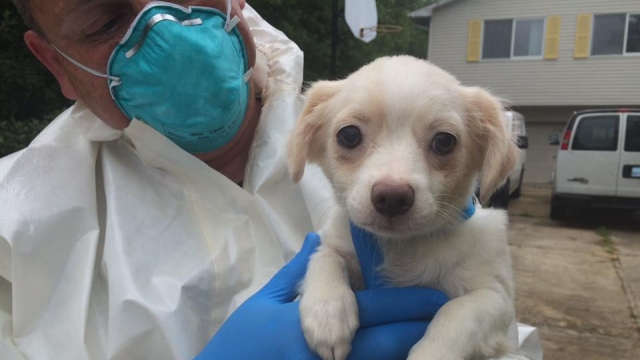 More than 250 dogs were recovered from an 1,880-square-foot home in New Jersey on Friday.

Authorities spent about 15 hours rescuing dogs and puppies from inside the home in Monmouth County. Officials say they were tipped off after a neighbor reported finding a dog on the loose.

When officials arrived, the homeowners said there were about 80 animals inside. But officials and volunteers rescued 276 dogs and puppies — all of which were alive.

"The conditions in the house are deplorable. We actually have dogs in there that are giving birth at the moment as we speak. We're bringing out newborn puppies that are just minutes old," officer Ross Licitra said.

The dogs and puppies are of various breeds, including pugs, chihuahuas, Yorkshire terriers and mixed breeds. The Asbury Park Press reports some were found on shelves, on platforms and even inside the walls.

"It's like a hamster cage for dogs in there. They have steps that go up to the shelf, and there are dogs looking down at you and barking," a rescuer told WNBC.

Fire crews brought thermal imaging devices to the home to make sure no dogs were left behind hiding behind furniture or in cracks in the home.

Authorities told reporters the homeowners are cooperating with the investigation.

"These are crimes of omission where people wind up getting into positions where they don't truly mean to be cruel to the animals, but they wind up in a situation that becomes out of control," Licitra said.

As of Sunday, officials were still determining what charges to bring against the homeowners. All of the rescued dogs are expected to be put up for adoption.

This video includes clips from WCBS and WPVI and images from the Monmouth County Sheriff's Office.