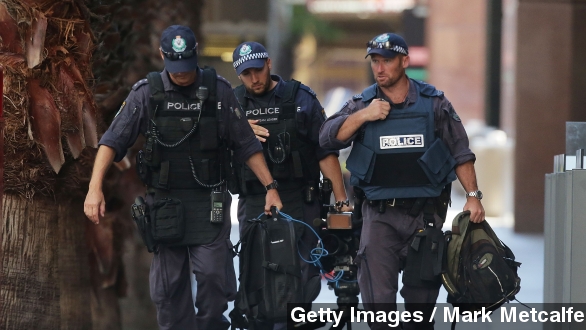 Even though the gunman reportedly forced captives to display a flag similar to the one used by ISIS. (Video via BBC)

At the very least, the gunman seems to be politically motivated. He reportedly demanded a meeting with Australian Prime Minister Tony Abbott, who has been a major backer of the U.S.-led campaign against ISIS. Aware of possible retaliation, Australia has beefed up its national security apparatus in recent months, rolling out a series of counterterrorism laws in August aimed at preventing Australians from joining up with militant groups.

The threat remained. Shortly after, horrifying images emerged showing the son of an Australian ISIS militant holding the head of a decapitated Syrian soldier.

Then, for the first time since the system was introduced in 2003, Australia raised its terror threat level from medium to high. "Raising the alert level to high is designed to raise awareness," Abbott said.

And that same week, Australian security forces arrested 15 people in what they called the "biggest counterterrorism raid" in the country's history." (Video via Australian Federal Police)

In October, in its English-language magazine, ISIS named Australia as one of its five main targets for terrorist attacks.

Soon after, this chilling warning from an Australian teenager surfaced. "These soldiers … we will not stop fighting … on top of Buckingham Palace … until we put the black flag on top of the White House. We will not stop. We will fight you."

Rattled by the terror threats, Australia banned its citizens from traveling to ISIS' stronghold — the Syrian province of Raqqa. (Video via RMC)

Which brings us to today. Reports suggest the Sydney siege is the work of a single individual without direct ties to any organized terrorist groups. (Video via RT)

And therein lies the problem: No matter how much Australia steps up its security, as other governments have learned, lone wolf attacks are nearly impossible to prevent.

This summer, security experts at The Soufan Group estimated at least 200 Australians were fighting for ISIS in Syria. (Video via YouTube / أبو مصعب الغزي)