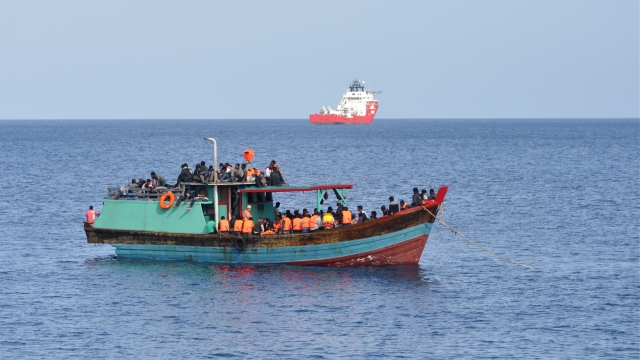 SMS
Australia Might Ban Illegal Asylum-Seekers For Life
By Ryan Biek
By Ryan Biek
October 30, 2016
The law would prevent migrants who arrive illegally by boat from entering Australia again, even if they return as tourists or businesspeople.
SHOW TRANSCRIPT

Australia may soon pass a law that bans illegal asylum-seekers for life.

The country already has a firm policy that bars migrants who illegally come by boat from settling in Australia.

But this law would keep them from ever entering again, even they were a tourist, conducting business or were married to an Australian citizen.

This move is just one of several in Australia's controversial fight against illegal immigration. Prime Minister Malcolm Turnbull said: "You need the clearest of clear messages. This is a battle of will between the Australian people, represented by their government, and these criminal gangs of people smugglers."

The law could be used against the 1,300 people currently held at detention camps on two islands in the Pacific. Most journalists haven't gotten access to the camps, but an estimated 72 percent of the people detained there are designated refugees.

Since 2014, no boat has succeeded in smuggling asylum-seekers past the Australian navy's blockade. Opponents argue the bigger issue for the Australian government should be helping those in camps find permanent places to resettle.

An Amnesty International representative told Al Jazeera this new law would be added punishment because the government can already control who enters the country.