Where Will These 850 Asylum-Seekers Go Now That Their Camp Is Closed? 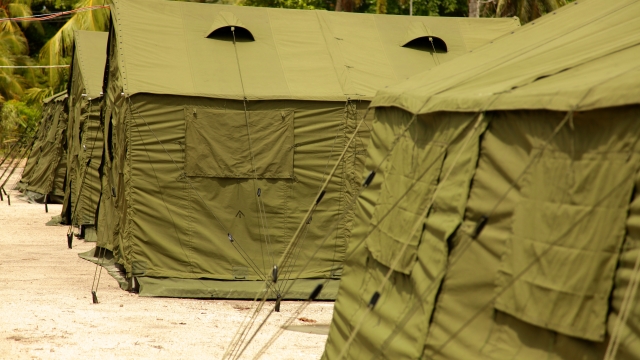 SMS
Where Will These 850 Asylum-Seekers Go Now That Their Camp Is Closed?

By Melissa Prax
August 17, 2016
A center for asylum-seekers is closing, and Australia said it won't take in any of the hundreds of them who need a new home.
SHOW TRANSCRIPT

The future seems unclear for some 850 male asylum-seekers at a center near Papua New Guinea and Australia.

On Wednesday, the two countries announced the center would be closing. It's on Manus Island — north of the Papua New Guinea mainland.

And Australia says it won't open its doors to any of the refugees there.

That's also what officials said in April after Australia's supreme court ruled the center was unconstitutional.

But Papua New Guinea's prime minister said he would welcome refugees to his country.

And that seems to be the plan — either the asylum-seekers will get resettled in Papua New Guinea or sent back to their original countries.

However, humanitarian groups have long pressed for Australia to take in refugees from Manus.

A United Nations report from 2013 said Australia does need to protect refugees, especially during the transfer process.

Still, the shutdown is likely a win for humanitarian groups, which previously condemned living conditions on the island.

Pro-refugee activists stormed the Australian prime minister's speech Wednesday, demanding Manus and another nearby center be shut down.

But regardless of backlash, Australia's immigration minister said it will likely take years for the center to close.