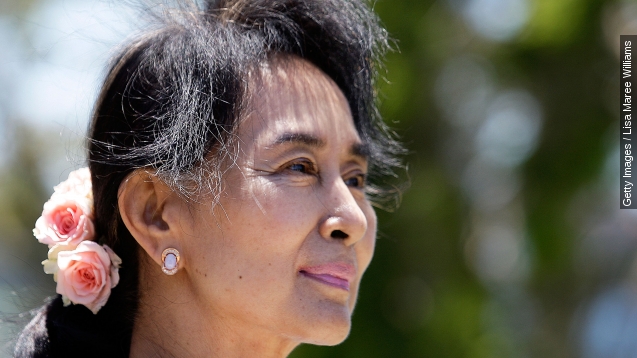 Facing persecution for their religious beliefs at home in Myanmar, as many as 20,000 members of the Rohingya ethnic group have set out to sea over the past months and their situation is dire. (Video via Voice of America)

Yet, despite the fact that one Rohingya told The New York Times they've been at sea for three months, the U.S. didn't say anything until last week. (Video via The White House)

"The United States continues to raise these concerns with the Burmese government and underscore the urgent need to fulfill the government's commitments to improve the lives of all those affected by that humanitarian crisis," Deputy Press Secretary Eric Schultz told reporters.

Still, the White House's silence on the issue is surpassed by one of Myanmar's most famous faces: opposition leader and activist Aung San Suu Kyi. (Video via Al Jazeera)

Suu Kyi's lack of comment on the more recent Rohingya persecution has been noted for a while, but now, as the situation worsens, the calls for her to get involved are increasing. (Video via British Forces Broadcasting Service)

We've covered why the Rohingya people have been persecuted before, but essentially the conflict stems from them being predominantly Muslim in a majority Buddhist country, and the government has resorted to denying them citizenship and putting them in internment camps. (Video via The New York Times)

Nevertheless, Suu Kyi claims, "It's not ethnic cleansing ... Muslims have been targeted, but also Buddhists have been subjected to violence," Suu Kyi told the BBC in 2013.

Suu Kyi has evaded the issue for years, and some observers, like New York Times columnist Nicholas Kristof have argued, "It seems as though she aspires to become president of Myanmar, and speaking up for a reviled minority could be fatal to her prospects."

But Suu Kyi has tried to refute those claims, saying she's staying out of it to avoid worsening the conflict. (Video via The White House)

In the meantime, thousands of Rohingya continue to look for safe harbor, with several southeast Asian countries like Thailand and Malaysia refusing to let them in. (Video via Thailand Colour Television Channel 3)

Some of the Rohingya who landed in Indonesia say as many as 200 people died during the journey.