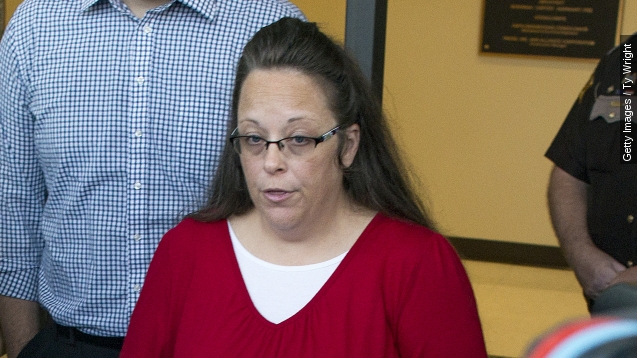 SMS
Attorney Says Kim Davis Violated Court Order
By Matt Picht
By Matt Picht
September 18, 2015
Kentucky clerk Kim Davis violated a court order not to interfere with marriage licenses issued by her office, according to an attorney for her deputy.
SHOW TRANSCRIPT

Rowan County Clerk Kim Davis' legal trouble may not be over yet, according to an attorney for one of her deputies.

The problem stems from the marriage licenses issued to same-sex couples by the county office. Davis has refused to issue those licenses under her name, and has been removing both her name and the name of the county from the finished forms.

There's been some debate about whether the licenses are still valid, but Kentucky Gov. Steve Beshear says he'll recognize them.

Valid or not, the alterations might contradict a judge's order commanding Davis not to interfere with marriage licenses issued to same-sex couples. That's the argument advanced by an attorney for Rowan County Deputy Clerk Brian Mason, who's been issuing the licenses in Davis' stead. (Video via Lexington Herald-Leader)

The court order says "appropriate sanctions will be considered" if Davis violates the order. She previously spent five days in jail for refusing to issue marriage licenses.