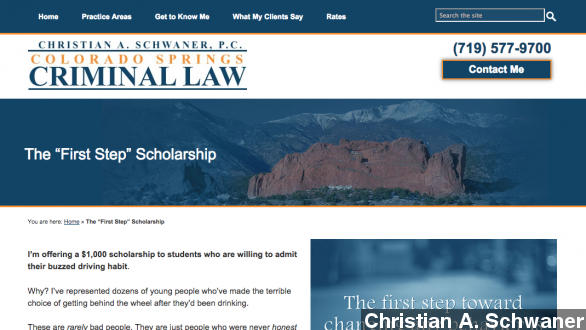 Absolutely nobody recommends drinking and driving, but if you've made the mistake of doing so, could you get some money for it?

Maybe. A Colorado attorney is offering a scholarship to a prospective student who admits to sometimes driving buzzed.

According to the scholarship page, one U.S. citizen enrolling in college or trade school in fall 2015 could get $1,000 for sharing his or her story. Attorney Christian A. Schwaner says it's about recognizing and changing that behavior.

He writes: "I've represented dozens of young people who've made the terrible choice of getting behind the wheel after they'd been drinking. These are rarely bad people. They are just people who were never honest with themselves regarding their buzzed driving habit."

Schwaner — who says he wants to "make a difference" — asks that applicants write an essay to be considered for the scholarship. Basically, he hopes they'll gain greater understanding of what they did by writing about it.

Impaired driving is a serious issue. According to the Colorado Department of Transportation, more than 26,000 people are arrested every year for driving under the influence, and 150 are killed in alcohol-related crashes. These crashes make up more than one-third of the state's motor vehicle fatalities.

The Denver Post spoke to a Colorado State Patrol spokesman who wasn't necessarily opposed to the idea but had a further suggestion:

"[He] suggested requiring applicants to sit on a Mothers Against Drunk Driving panel or creating some kind of ongoing contact with the winner to ensure they follow through on their plan."

We talked with Schwaner, who says for now, the scholarship will go to one recipient, but if he gets a lot of responses, he says he'd consider offering it up again. The scholarship money will be awarded in August.