Atlanta Braves Fan Falls To His Death At Turner Field 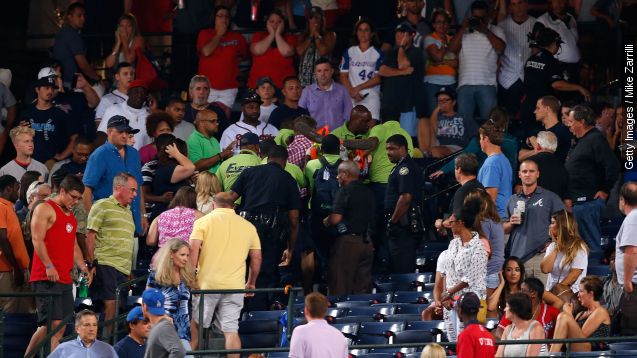 SMS
Atlanta Braves Fan Falls To His Death At Turner Field
By Matt Moreno
By Matt Moreno
August 30, 2015
The fan fell over a railing behind home plate and onto the section below. He was later pronounced dead at the hospital.
SHOW TRANSCRIPT

An Atlanta Braves fan died Saturday night after falling from the stands during a Yankees-Braves game.

The man, identified as 60-year-old Gregory Murrey, fell from the upper deck at Turner Field during the 7th inning. According to witnesses at the game, Murrey was heckling Alex Rodriguez when he apparently lost his footing.

Officials initially said the man was in "grave" condition. He was pronounced dead at Grady Memorial Hospital.

The Braves released a short statement after the game, confirming the fan's death and offering their deepest condolences:

"We have received confirmation that a fan involved in an accident at this evening’s game has passed away. The Atlanta Braves offer their deepest condolences to the family."

The fall left many fans at the game horrified and several expressed their shock on social media.

But many also criticized the Braves for not pausing the game as medical personnel scrambled to help Murrey. Fans say shortly after he fell, the Braves started the 7th inning stretch.

Murray's family released a statement to CNN which reads, "Greg was a season ticket holder with the same seats for 23 years. The night Greg passed away, he was doing one of his favorite things — watching the Braves. At this time, the family wishes for you to respect their privacy as they mourn the less of such an extraordinarily wonderful man."

The fall is still being investigated and it's unclear if alcohol played a factor in it. This is the second death in three years at Turner Field.