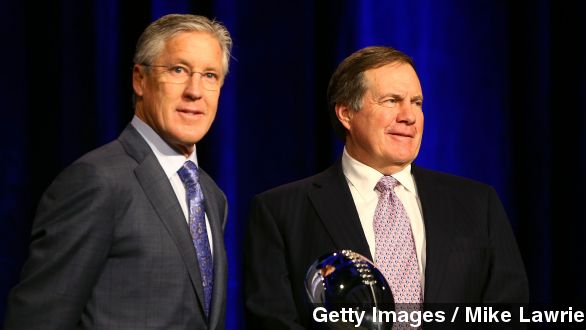 SMS
Athletes' Sleep Cycles Could Decide The Super Bowl
By Ben Lawson
By Ben Lawson
January 30, 2015
A new study suggests that an athlete's sleep cycle has a big effect on performance. What are the implications for the Super Bowl?
SHOW TRANSCRIPT

The Super Bowl is the biggest American sporting event of the year, and you can bet coaches Bill Belichick and Pete Carroll are going to need all the help they can get to win it.

But according to some scientists, the key to success might have been found across the pond — at ye olde University of Birmingham, where two researchers concluded that an athlete's sleep cycle has a major effect on performance.

Their study is called "The Impact of Circadian Phenotype and Time since Awakening on Diurnal Performance in Athletes" and, if that sounds a little complicated, its conclusion really isn't: Don't sleep on sleep when it comes to athletic performance.

Here's what they did: 20 athletes were selected and identified by "chronotype" — basically, whether they're night owls or early birds. Then, over the span of several weeks, the researchers put them through a series of fitness tests at different times of the day.

And the results were stunning — "night owls" performed up to 26 percent better in the evening than in the morning or afternoon. The later you wake up, the later you hit peak performance.

So what does it mean for this year's Super Bowl? HealthDay reports it would seem to give the Seahawks an edge over the Patriots. Sleep scientist Safwan Badr said, "If you're an East Coast team playing on the West Coast at night, you're really at a disadvantage."

But before you head to Vegas and put your life savings on the 'Hawks, keep in mind these results have a lot to do with the particular sleep patterns of the athletes.

For example, Business Insider reports that Tom Brady hits the sack at 9 p.m. — suggesting he would be at his sharpest around dinnertime, not 4:30 p.m. Central time when he'll take the field for Super Bowl.

On the other hand, who can forget the time Brady's opponent, Marshawn Lynch, appeared to doze off at 8:42 p.m. at last year's ESPYs — suggesting the fearsome running back could be an early bird and therefore a step behind on Sunday.

Yet whether for better or worse, both teams will probably try to get plenty of sleep Saturday night. Our advice? Watch the game, and if your team does poorly, you'll at least have a brand new excuse.

This video includes images from Getty Images and Dom Crossley / CC BY 2.0.