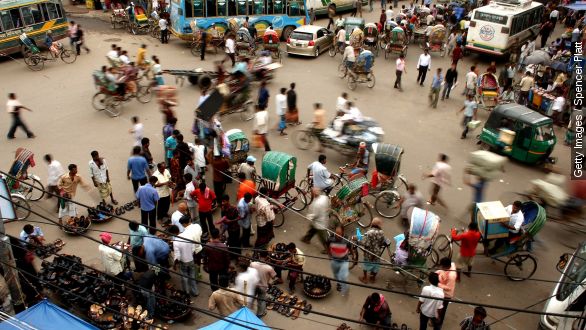 SMS
Atheists Become Targets For Extremists In Bangladesh
By Jill Ornitz
By Jill Ornitz
April 4, 2015
Two Atheist bloggers in Bangladesh have been killed in the last month, showing how extremists have a greater state in the country's national politics.
SHOW TRANSCRIPT

Two atheist bloggers in Bangladesh have been killed in the last month. The reason? Their lack of religious belief.

According to local media outlets, both bloggers were hacked to death by extremists for writing posts critical of Islam. (Video via Euronews)

The second blogger killed stood in solidarity with Roy. He was then attacked by students from a Muslim school who are in police custody. (Video via BBC)

Free speech advocates have compared these deaths to the attack on Parisian satirical magazine Charlie Hebdo, asking where the "We Are Charlie" supporters have gone.

But these deaths in Bangladesh go beyond issues of free speech. They show extremism is on the rise in a country with a tumultuous political landscape.

Muslim extremist groups have aligned themselves with the opposition Bangladesh Nationalist Party to protest the secular state. (Video via Al Jazeera)

And the secular-religious divide has only grown in the last year. According to The Financial Times, secular demonstrators have called elderly Muslims to be hanged for crimes committed in Bangladesh's bloody civil war. (Video via Jewish News One)

The BNP tried to enforce a public transportation boycott this year and then firebombed a bus in February, killing seven. (Video via ODN)

More than 90 percent of Bangladesh's population is Muslim. According to statistics from 2011, the country makes up just over 9 percent of the world's total Muslim population.