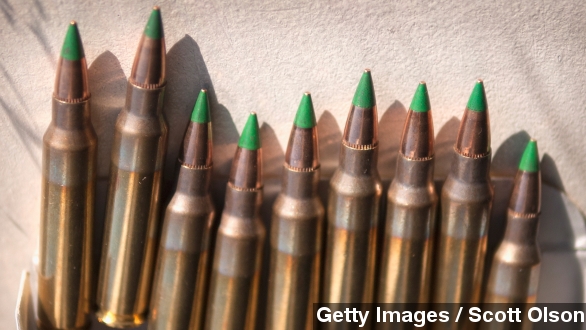 The Bureau of Alcohol, Tobacco, Firearms and Explosives — known as the ATF — announced Tuesday it would not make a final decision on whether to ban a popular form of ammunition, essentially delaying a heated debate about safety and Second Amendment rights.

At the heart of that debate are M855 "green tip" rifle rounds — ammunition used by NATO forces and hunters in models of the AR-15 rifle. (Video via YouTube / tnoutdoors9)

In February, the ATF released a proposal that would ban what it called "armor piercing ammunition" to protect law enforcement officers.

The ban would've prohibited the production, sale or import of those rounds to ensure they couldn't be used with more easily concealed firearms.

The ATF also explained in its proposal an influx of manufacturers have requested exemptions for armor piercing ammunition, forcing the agency to reexamined how it classified certain types of ammo — with input from interested parties, like "firearms and ammunition industries."

But gun rights advocates dubbed it the "backdoor bullet ban" and see it as the administration's way of pushing gun control.

"What good is a car with no gas? A cell phone without a data plan? A laptop without electricity? Or a gun with no ammunition," YouTuber Colion Noir said.

The ATF received 80,000 comments during the framework's public comment period and a letter from 53 Republican senators condemning the plan. The debate has been shelved, but it's not over just yet.

The agency says it will allow public comments on the matter until Monday, March 16. After that, the ATF will review the comments before delivering its final framework on armor piercing ammunition.