At Middle Age, Microsoft Is Looking To The Future 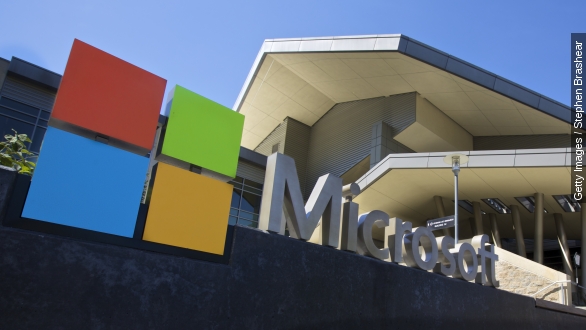 SMS
At Middle Age, Microsoft Is Looking To The Future
By Evan Thomas
By Evan Thomas
April 4, 2015
Microsoft’s 40th anniversary shows a company that’s changed and expanded from an earlier focus solely on its own operating system.
SHOW TRANSCRIPT

Microsoft turns 40 today, but there’s not much of a midlife crisis going on in Redmond. If anything, the company sounds excited for the future.

Co-founder and former CEO Bill Gates issued a letter to employees on the anniversary:

“Technology is still out of reach for many people, because it is complex or expensive, or they simply do not have access. So I hope you will think about what you can do to make the power of technology accessible to everyone.”

That’s a bit of a change from Gates’ policy when he was running the company. From Microsoft’s inception in 1975, the company pushed an aggressive Windows-first, Windows-only strategy. The expansion of its operating system’s reach took priority over pretty much everything else. (Video via TED)

The drive to saturate the market earned the company a series of antitrust hearings in front of the FTC. (Video via C-SPAN)

In recent years, Microsoft has expanded to beyond just Windows and Office. It has a mobile OS, cloud services, game consoles and a search engine; it even designs its own tablet computers and smartphones.

But the company never lost sight of its software, and under CEO Satya Nadella, it’s busy reinventing that focus.

At ZDNet, Mary Jo Foley points to Microsoft’s unified platforms — everything from Windows, to Skype to voice assistant Cortana to Xbox Live’s dashboard all support the company’s vision of “One Microsoft” across devices.

Some of that involves a reversal of stance on open-source software. The term was once taboo in Redmond, but Softpedia reports close to 20 percent of the software on Microsoft’s Azure cloud platform now plays nicely with Linux.

Some officials have even admitted to considering sending Windows itself open-source.

"It's definitely possible. It’s a new Microsoft. Every conversation you can imagine about ‘what should would we do with our software? Open, non-open services?’ It’s happened,” Microsoft's Mark Russinovich, said at a conference this week. (Video via Chef)

Microsoft’s new willingness to work with more of the software ecosystem has helped change its perception among the rest of the Silicon Valley tech industry.

“Reputations are slow to change, as you said. You’re right: Microsoft has not been ‘cool’ in the Bay Area or anywhere else for a long time, and it’s slowly starting to change that,” the Wall Street Journal’s Shira Ovide said.

Some of the latest news will no doubt help that perception along. Microsoft says Windows 10 will be free for Windows 7 and 8 users. It’s expected to arrive sometime in mid-2015.

This video includes images from Getty Images and music by Podington Bear / CC BY 3.0.