At Least 5 Killed In An Explosion In Istanbul 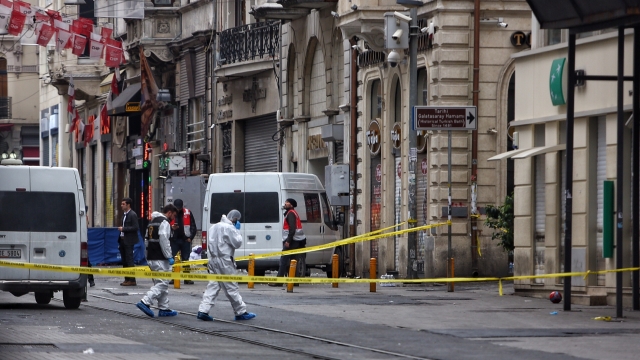 SMS
At Least 5 Killed In An Explosion In Istanbul
By Ethan Weston
By Ethan Weston
March 19, 2016
Authorities say they believe a suicide bomber in a popular tourist area caused the explosion that killed several people and injured dozens of others.
SHOW TRANSCRIPT

A suspected suicide bombing in Istanbul has left at least five people dead and dozens injured. Multiple outlets report 12 foreigners are among the injured.

The bomb went off around 11 a.m. local time in a famous tourist shopping area in the city, killing the attacker.

"Istiklal Street is like a bomb going off in Oxford Street in London, or Piccadilly Circus or Fifth Avenue in New York," said Al Jazeera's Jamal Elshayyal.

Turkey has seen attacks like these in recent months. This bombing comes less than a week after an attack in Turkey's capital of Ankara that killed 37 people. A Kurdish militant group claimed responsibility for that attack.

As of Saturday morning, no group had claimed responsibility for the recent attack in Istanbul.

This video includes clips from Al Jazeera and images from Getty Images.